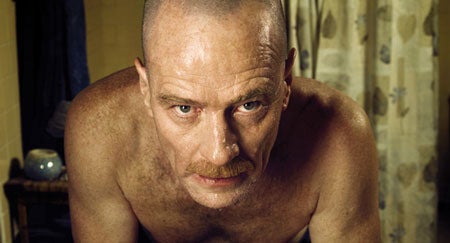 In a case of fan casting that may come true, Breaking Bad leading man Bryan Cranston is reportedly being considered to play Lex Luthor in the forthcoming Man of Steel sequel, which will feature Batman sharing screen time with the Last Son of Krypton.

Of course, this could go either way; it's a rumor from Latino-Review's el Mayimbe, who takes a lot of big swings at superhero movie scoop and comes up with some big hits--but almost as many whiffs.

Still, he's got a good deal of visibility in cases like this and, as happened with Mark Wahlberg, it's not totally implausible that Cranston's odds of getting the gig could be helped by the fan enthusiasm that comes out of the rumor.

Besides wrapping on Breaking Bad, the long-running and critically-acclaimed drama in which Cranston plays high school teacher Walter White, who turns to a secret life as a meth cook and dealer after he's diagnosed with terminal cancer, the actor is currently filming Godzilla for Warner Bros., who will produce the Batman vs. Superman movie. He starred with Ben Affleck, one of the rumored Batman candidates, in Affleck's Oscar-winning Argo last year.

Here's what el Mayimbe had to say about Cranston's prospects (without actually naming him):

Actor for Lex is so painfully obvious/on the nose, u wouldn't believe me even if I told you. Hell, I don't believe it myself. Take a guess?

FANBOY BLIND ITEM: Which superhot actor finishing final season of hit TV show who also was in 2 films for WB is up for juicy badguy part? :) — elmayimbe (@elmayimbe) August 8, 2013

In fact, this actor is in this studio's tentpole which comes out next summer. :) — elmayimbe (@elmayimbe) August 8, 2013

FINAL CLUE FOR Y'ALL FANBOY KNUCKLEHEADS WHO CAN'T TAKE A HINT: This actor played a bad guy (embarrassed that he did) on the POWER RANGERS.

...which, yes, Cranston has done. As a voice actor in the '90s, he did a handful of jobs you'd never expect of him, including a one-off on the Clerks cartoon and two appearances--as Snizard and Twinman--on Mighty Morphin' Power Rangers.