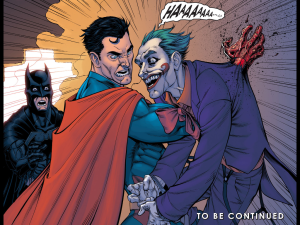 Yesterday, we looked at five reasons why The Joker should appear in the upcoming Batman Vs. Superman. With the summer of 2015 shaping up to be a very competitive time at the box office, the biggest point made was that it wasn’t time for Warner Bros. to play it conservative. The Joker would help make a big movie even bigger. However, there are also some compelling reasons why Warner Bros. should not include The Joker in Batman Vs. Superman, and here are five reasons why The Joker should not appear.

5. Overshadow Batman And Superman – In explaining why Ultron would not be the villain in the first Ant-Man movie, director Edgar Wright recently made a point about how The Joker overshadowed Batman in Tim Burton’s original Batman movie. It’s a very good point. Fans have been waiting years to see Batman and Superman together on the big screen, and a character as big as The Joker could take the focus off the two superheroes. It should be Batman and Superman’s movie, not The Joker’s movie.

4. Give Another Villain A Chance – The Joker has already had two memorable appearances in Batman movies. There are plenty of villains out there that could challenge Batman and Superman. The same argument could also be made against Lex Luthor. Why not introduce a villain that has never been seen on the big screen before like Braniac?

3. Heath Ledger – People are already in an uproar over if Ben Affleck will be able to fill the shoes of Christian Bale. Does Warner Bros. really want to add someone trying to follow Heath Ledger into that equation? Heath Ledger gave a performance for the ages as The Joker, and it’s hard to imagine that anyone will possibly be able to ever top it. It might be better for Warner Bros. to get the new Batman franchise up and running, before worrying about how to cast someone new in The Joker role.

2. Too Soon After Tragedy – While in a perfect world it shouldn’t be an issue, there’s no way to deny that it probably is. Because the suspect in the Aurora shootings reportedly claimed to be The Joker, there is a certain stigma attached to the character. It might be a better move for Warner Bros. to allow more time to pass, before trying to re-introduce The Joker.

1. Save Him For Later – While one of our biggest arguments for using The Joker was that Warner Bros. shouldn’t hold back with this movie in the face of tough competition in the summer or 2015, there could also be an argument made that maybe they should hold back just a little. The pairing of Superman and Batman is going to be a pretty powerful draw around the world, and it raises the question of what they can do for an encore. The Joker is such a powerful character that maybe Warner Bros. should save him for later to create excitement around the next Batman standalone movie.

Bonus Reason: Take a look at the picture at the top of this article. We all know what finally happened between Superman and Zod. Do we really want to see Superman kill off Batman's biggest villain before he even has a chance to appear in a new standalone Batman movie?

Batman Vs. Superman: Five Reasons Against The Joker Appearing