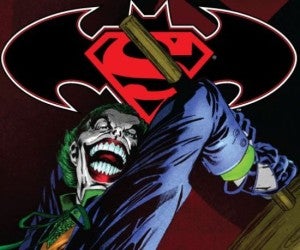 Who will be the villain or villains in the upcoming Batman Vs. Superman movie? It’s a question we posed the other week, which generated quite a bit of debate. While the groundwork seemed to be laid in Man Of Steel for Lex Luthor to appear in the Man Of Steel follow-up, there’s no guarantee that he will turn out to be the main villain in Batman Vs. Superman. Also, there’s always the possibility that there will be more than one villain. We plan to look at both sides of the coin this weekend as to whether The Joker should appear in Batman Vs. Superman. Below we’ve presented five reasons why he should appear, but check back tomorrow for five reasons why he should not be part of the movie.

5. Star Wars Episode VII & The Avengers: Age Of Ultron – Summer of 2015 is filled with blockbuster movies. Warner Bros. cannot afford to play it safe. In any other summer, the draw of Batman and Superman alone would probably be enough to make a movie the highest grossing film of the year, but Batman Vs. Superman will be going up against the Avengers sequel and a Star Wars sequel that will likely feature the return of the original cast. Warner Bros. needs to pull out all the stops and that includes bringing back Batman’s most well-known villain.

4. The Dark Knight Returns – While Batman Vs. Superman is not supposed to be a direct adaptation of The Dark Knight Returns, it certainly sounds like it might be very similar. Warner Bros. has cast Ben Affleck as an older Batman, and Frank Miller has been rumored to be consulting in some capacity with director Zack Snyder. If Man Of Steel wants to mirror Dark Knight Returns to some degree, then including The Joker would make sense, because he was an important part of that storyline.

3. Two Superheroes Need At Least Two Villains – For a great superhero movie, the villain or villains need to be a huge threat. In the Man Of Steel, Superman squared off against Zod and his gang. He was outnumbered, but he still managed to come out on top. For both Batman and Superman, there needs to be two or more villains. It doesn't need to be just Batman and Superman gang up on one guy, as it would make the heroes look weak.

2. Awards – When it comes to superhero movies, The Joker is the only character who consistently generates award buzz. Jack Nicholson was nominated for a Best Supporting Actor Golden Globe for his portrayal of The Joker, and Heather Ledger posthumously won a Best Supporting Actor Oscar for his turn as The Joker. If Warner Bros. wants to make some noise during Awards season with Batman Vs. Superman, then they need to include The Joker.

Batman Vs. Superman: Five Reasons The Joker Should Appear