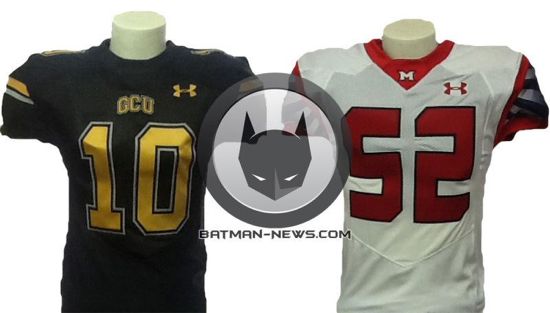 As previously reported, the first scene for Batman Vs. Superman will film in Los Angeles this weekend. It's a crowd scene that will take place at East Los Angeles College’s Weingart Stadium. The scene centers around a football game between Gotham City University and Metropolis State University. The scene will be film during halftime of East Los Angeles College's game with Victor Valley College on Saturday, October 19, 2013. Batman-News.com was able to obtain photos of the jerseys of both teams. The Gotham City University jerseys have a black and yellow color scheme similar to the Gotham Rogues design in The Dark Knight Rises. The Metropolis State University jerseys have a red and white color scheme. Batman Vs. Superman is scheduled to be released in movie theaters on July 17, 2015.