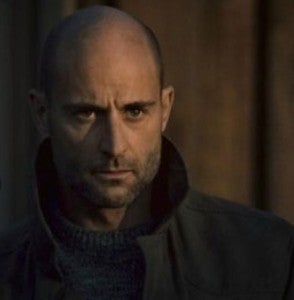 Earlier today rumors surfaced that Breaking Bad's Bryan Cranston was being considered for the role of Lex Luthor in the Man Of Steel follow-up, which will likely be called Batman Vs. Superman. Now, one of the actors, who fans have been suggesting should play the Lex Luthor role, appears to be saying something along the lines of not so fast.

When Digital Spy asked Mark Strong about rumors that he would be playing Lex Luthor in the Man Of Steel follow-up, Mark Strong replied, "All I can say is... watch this space." It's an interesting reply, because actors usually tend to deny involvement if rumors are false or respond with "no comment" if rumors are true. Mark Strong's response kind of hints that there might be some truth to rumors of him playing Lex Luthor. Of course, it could also be that he hasn't talked to Warner Bros., but he's interested in the role and wants to encourage fans to rally around him for the role.

Mark Strong previously played Sinestro in the Green Lantern movie, so if he lands the Lex Luthor role, it would be his second time playing a villain in a DC Comics movie.

Batman Vs. Superman is scheduled to be released sometime in 2015.