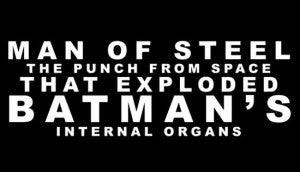 A little while back, Comicbook.com broke the news that the upcoming Batman and Superman movie would likely be called Batman Vs. Superman, but it could also be called Superman Vs. Batman. Regardless of who eventually winds up with top billing, the indication from Man Of Steel screenwriter David S. Goyer was that the film would be a versus movie.

It's that premise upon which the How It Should Have Ended team have based their latest video. In Super Cafe: Versus, Superman and Batman discuss possible titles for their upcoming film together. Batman suggests, "The Dark Knight Rises Again And Then Beats Up Superman." On the other hand, Superman offers the counter suggestion, "Man Of Steel The Punch From Space That Exploded Batman's Internal Organs."

The two then argue over who would in a fight. Check out the full video below.