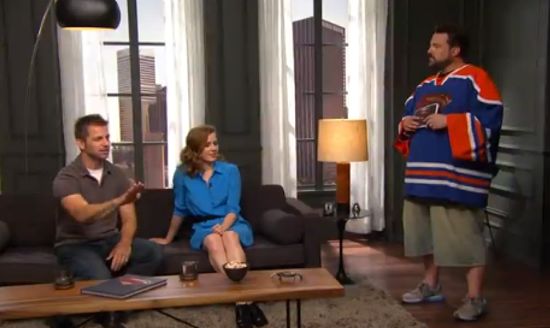 On Saturday, Man Of Steel director Zack Snyder participated in a live fan chat on Yahoo, and for the most part avoided giving away any spoilers on the upcoming Man Of Steel sequel. In fact, the upcoming Batman and Superman movie still hasn’t been officially named, which is starting to become awkward at this point.

At one point, in describing the film, Kevin Smith had to say “Batman Vs. Superman, Superman Vs. Batman, Man Of Steel 2, there is no official title yet, so I’m just guessing and speculating here.”

Smith went on to try to pry some details out of Sndyer, adding, “We keep saying, you even said it earlier, Superman V Batman, there’s a “V” in there, so naturally people, based on the announcement and the passage that you guys read from The Dark Knight Returns, [think] this isn’t a friendly relationship. Like my mom even knows about this movie. She’s like, ‘I hear Batman and Superman are going to be in a movie and they’re not friends.’ And I’m like, ‘We’ll see mom. This is a very complicated relationship.’”

In response, Snyder said, “The verdict’s not out on that completely. No, I think that’s sort of the fun of the idea is to be able to sort of play with that relationship, and whether they’re fighting or they become friends or they’re friends and they fight. That’s the fun of kind of making movies and playing with this kind of mythology. You get to take these icons and see how emotionally they fit together. I think that’s the most important thing and the fun thing. And of course, they’ll be some physical conflicts as well.”

Batman Vs Superman: Snyder Says Verdict Still Out On If They Fight