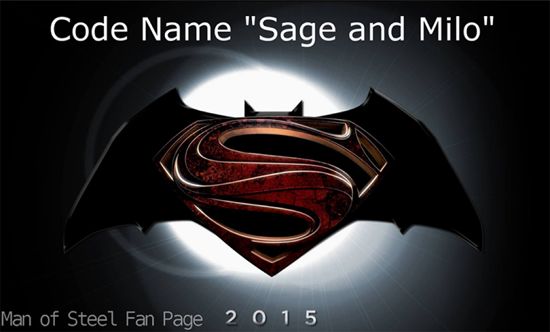 Most comic book movies have working titles. Sometimes the working titles have special meaning and other times they seem completely random. Iron Man 3 initially filmed under the working title "Caged Heat," which was later changed to just "Caged." While fans speculated that it could be some type of hint that Luke Cage might appear in Iron Man 3, that turned out not to be the case and the Iron Man 3 working title is still a mystery.

The main purpose of a working title is usually to disguise the movie during the early stages of casting and production. The theory would be that the fake name would help to fool fanboys and press who want to scope out the movie. However, working titles usually don't stay secret for long.

The Man Of Steel Fan Page is claiming to have uncovered that the working title/code name for Batman Vs Superman is Sage and Milo. They've been right before on a number of things in the past in relation to Superman filming. Casting and test shoots are reportedly being done under this name.

So who are Sage and Milo? Well, there is a Batman villain named Professor Milo, so that could be one possibility. As far as Sage, we don't have anything yet, so be sure to leave your speculation in the comments. The most obvious theory might be that the names refer to Batman and Superman, but they may or may not have any relation to characters that actually appear in the comic books.

Batman Vs. Superman Working Title Is Reportedly Sage And Milo