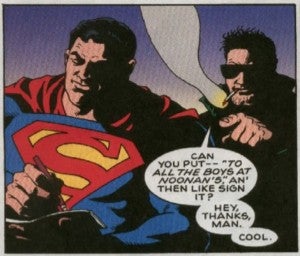 Earlier today, beloved Batman writer Scott Snyder held court on Twitter, discussing some of his favorite Superman stories of all time. This is, of course, notable mostly because Snyder is widely rumored to be launching a Man of Steel comic book series in 2013 with artist Jim Lee--rumors that DC Comics brass have declined to deny when given the opportunity. After telling his followers on Twitter that he would watch Superman II with his son for the first time today, Snyder asked his audience what their favorite superhero stories are--and then he listed his. So...what might Man of Steel count among its chief influences? Well...

"The Dark Knight Returns for me, is also one of the most fascinating interpretations of Superman," Snyder said. "That and Red Son with Superman gone too far." Waid, expressing his gratitude for Snyder's kind words, asked the writer whether he had received some Elliot S! Maggin Superman novels. "They're the pinnacle, the definition of Superman to me," said Waid of the man who would later novelize Kingdom Come. Snyder answered that he was about to, asking whether there were any others beyond The Last Son of Krypton and Miracle Monday that he should read. Waid also joked that nothing, be it Birthright or anything else on Snyder's list, is "in-continuity" following the New 52 relaunch. Some more notes on Snyder's Superman influences: "I love the cosmic, epic imaginative elements of the early stuff, too. Stories like: The Showdown Between Superman and Luthor & Last Days" "Also, the animated series is killer and subsequent Superman Adventures is, too." Hours later, Snyder returned to the topic (in case anyone had any doubts that he might be cramming for a Superman job) with a mention of today's Superman #0 by Scott Lobdell, linking to a pair of positive reviews for the issue.