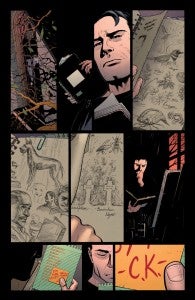 When the preview pages for last month's Batman & Robin #19 hit the stands, Bruce found a note in Damian's room from a person identified as "C.K." The note, which gave the late Robin a list of movies to try, prompted us to assume that it was Clark Kent (Superman), who for some reason had taken charge of Damian's pop-culture education.

Turns out we were wrong. Another month, another note from "C.K.," but this time we get to see it being written...by Carrie Kelley, the Robin of The Dark Knight Returns.

The appearance of Carrie Kelley in the series was rolled out as a huge announcement earlier this week, with series writer Peter Tomasi telling the media that he has long-term plans for the character, whether or not she'll actually become Robin.

The character, in this case, was apparently surreptitiously tutoring Damian, without the knowledge of the world's greatest detective...and apparently the world at large hasn't quite figured out that Damian is dead yet, because even Carrie thinks "he might come back."