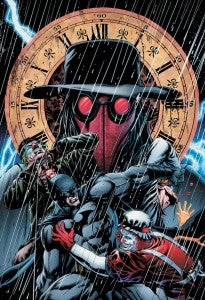 With Death of the Family finally wrapping up in February, DC is stacking its deck with Jokers that month.

The newly-released solicitation text for Detective Comics #17 sees Batman facing off against a new group called the League of Smiles, which DC describes as "a criminal group of psychotic killers that worship The Joker!"

Like the Sinestro Corps, Batman Incorporated and the multicolored Lantern Corps of Green Lantern: New Guardians, it seems as though this is an attempt by DC to expand the "branding" of characters who prove to be popular and merchandising-friendly. It's an understandable impulse, but one has to wonder whether The Joker, or the DC Universe, benefits from franchising his trademark grin.

The Joker, becuase of his unpredictability and brutality, tends to be at his best and most fascinating in smaller doses; the fact that they're creating what amounts to a Joker Corps spinning out of an event where we've already been inundated with Joker appearances for three months seems like a risky strategy for the publisher, who had seemed to understand in recent years that absence really does make the heart grow fonder when it comes to these recurring villains and that scarcity breeds demand among comics fans.

It's also hard to ignore the fact that, following the success of the Court of Owls and its "Talon" assassins, this is the second new  criminal fraternity to pop up in Gotham purporting to be a reflection of Batman's darkest and most twisted nightmares and featuring, presumably, a number of operatives who dress and act in a similar and deadly fashion.

Batman's League of Smiles: Do We Really Need More Jokers?