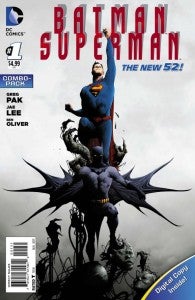 It wasn't that long ago that rumors had Greg Pak's World War Hulk headed to theaters--and while those rumors seem to have mostly fallen apart at this point, it's worth noting that he's currently writing one series--Batman/Superman--that was announced as a major motion picture at San Diego Comic Con International earlier this month.

Fate can be funny that way, we guess.

Pak has, in fact, established himself as one of the big "Superman guys" at DC right now, taking on Batman/Superman just weeks before being announced as the new, ongoing writer on Action Comics. And all of that while still working on Eternal Warrior for Valiant and his original graphic novel Code Monkey Save World with musician Jonathan Coulton and artist Tak Miyazawa.

Pak joined ComicBook.com to talk about his approach to teaming the two characters, how it feels to be writing comics' most enduring character while he's enjoying more attention than he's had in years and how having one of your leads on the big screen can help the book catch fire.

Note: As you can see from the last question, this e-mail was conducted via e-mail and the questions were asked prior to the announcement of the Batman vs. Superman movie. 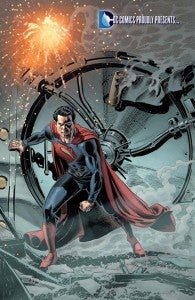 ComicBook.com: With this book and then Superman/Wonder Woman hitting so close together, I have to ask: do you think that Man of Steel has had a big impact on Superman's marketability within comics?

Greg Pak: Any time there's a big movie in theaters featuring your character, there's a great opportunity to get more folks interested in the comics. People have been talking about Superman non-stop for a couple of months now, and that strikes me as an excellent thing.

ComicBook.com: Somebody who's more marketable right now sure has to be you. I mean--jeez! How many new books have you had announced in the last three months?!

Pak: Ha! Well, right now I'm working on Batman/Superman and Action Comics for DC, Eternal Warrior for Valiant, and my the Code Monkey Save World I'm doing with Jonathan Coulton and Takeshi Miyazawa. I also wrote three Villains Month books for DC, so I've had a lot to talk about recently.

[Note: You can check out a preview of Eternal Warrior here, and our exclusive roundtable interview with the Code Monkey Save World creative team here.]

ComicBook.com: (As an aside, I'm quite tempted to make my headline for this interview "Code Monkey Write Superman," but I'll refrain.)

ComicBook.com: Going to Earth 2 in the first arc is an interesting choice; was that yours or was that already in place when you were invited to pitch?

Pak: The editors suggested that to me along the way while I was pitching various stories. It sounded like a ton of fun -- a fantastic way to challenge our young heroes by throwing them into conflict with older versions of themselves, so I was pretty thrilled. 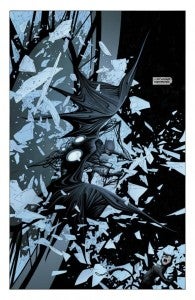 ComicBook.com: I like that it gives you a very different element than anything that's been explored in the other "Superman and Batman meet for the first time" stories. Prior to writing one, did you have a particular favorite of those?

Pak: I'm a sucker for the first of all of them -- when Clark and Bruce meet by chance when they're randomly designated as roommates on a cruise ship. I also really love John Byrne's meet-up story in his Man of Steel run -- there's a great wariness and element of danger to that story, which is resolved with a fantastic, character-revealing twist.

ComicBook.com: And was it on purpose, creating a very different way for them to meet?

Pak: Sure. We aim to surprise!

ComicBook.com: Do you think calling it Batman/Superman instead of World's Finest or The Brave and the Bold or something sucks a little of the drama out of that first meeting, since obviously they'll end up friends? Or do you figure that ship has already sailed since there's something like sixty years of them palling around at this point?

Pak: When you set a story in the past, readers will always assume they know the ending. The challenge is to find those plot twists and character revelations that we've never seen or thought about before that can resonate through to stories in the present-time in surprising, meaningful ways. So yes, we know Batman and Superman will end up as friends. But we're going to reveal nuances in that friendship that will provide tons of drama, fun, and surprises. Stay tuned!

ComicBook.com: This is the first time you've written for the New 52 that I can recall--is it exciting to have such an auspicious debut?

Pak: I won't be coy. The answer is YES. I'm absolutely thrilled and hugely grateful to all the DC editors who took me on and the amazing creative team behind Batman/Superman. Artist Jae Lee, colorist June Chung, letterer Rob Leigh, editor Eddie Berganza, and associate editor Rickey Purdin are bringing so much love and talent to this book. Love 'em all. 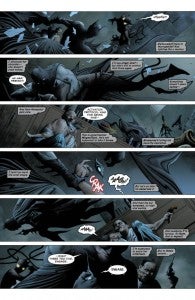 ComicBook.com: Actually, hang on a second--is this your first DC work? And it's Batman/Superman? Dude, I want your resume.

ComicBook.com: What's the biggest difference that you see as a writer between writing these characters for the New 52 and not?

Pak: I love writing in the New 52. Most importantly, these heroes are young and raw and still figuring out exactly who they are, what they're here to do, and how they're going to do it. That's a great place to be with characters -- huge potential for drama, conflict, and development.

ComicBook.com: Obviously you're dealing with Darkseid in the Villains Month book and he's tied in very strongly with the history of Earth 2. Will the two stories be somewhat interconnected?

ComicBook.com: What do you think of t-shirt Superman? You're writing during that era, and not many writers have had that opportunity...

Pak: Love him. He's young and cocky and raw. His heart's always in exactly the right place and he instinctively knows where he needs to go, but he's young and brash enough that he might make some pretty big mistakes along the way. That's a fantastic place for a writer to take on a character.

ComicBook.com: I would say that the movie puts a spotlight on Superman's solo titles in a way there hasn't been for a while. Do you think Batman/Superman escapes that a bit because it's so firmly comic-booky, or do you think that having these two in the same title was going to put it under a microscope to begin with? 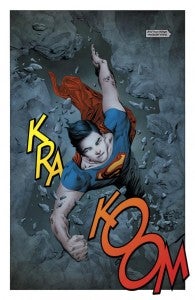 Pak: Batman and Superman are arguably the best known superheroes on the planet. They're part of our shared world culture at this point. So if you put them together in a book, there's a good chance folks will pay attention regardless of what's going on in the movie theaters. But put a huge movie up on the big screen at the same time and you have an even bigger chance of making a splash. So I'm very, very pleased and feel pretty darn fortunate with the way everything's shaken out.

I'll also say that a huge part of what made people pay attention to this book when we announced it was Jae Lee's art. Jae's a superstar and a genius and his art just seizes the attention. I really got a sense of the potential for the book to do well when a cinematographer friend who doesn't generally comment on my comics tweets retweeted the first Jae Lee preview pages we released. When you make civilians like that turn their heads, you know you're onto something pretty good.

ComicBook.com: Do you have any favorite DC villains or supporting characters that you hope to fit into this series, or will you be focusing more on new creations for the New 52?

Pak: I'm doing both -- creating new characters with every story arc and bringing in classic heroes and villains. I'll just tease that an awesome supporting character from Jeph Loeb's original Superman/Batman series will pop up in the next storyline. Dontcha dare miss it!