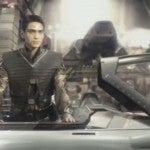 A trailer surfaced yesterday for Battlestar Galactica: Blood and Chrome, an upcoming Syfy pilot which will reportedly lead into a web series after reports yesterday revealed that it would not become an ongoing TV series on the network. Originally developed as a webseries and then upgraded briefly to a TV series before reverting to the original plans, is a prequel to the popular series which follows William Adama through the Cylon War, according to Ain't It Cool News. The promo got some great buzz online, including an incredibly enthusiastic writeup by io9 and some kind words from Bleeding Cool, so the announcement yesterday that it would revert to a webseries has puzzled some, but Syfy's Mark Stern, director of original programming, says, "We are actively pursuing it as was originally intended: a groundbreaking digital series that will launch to audiences beyond the scope of a television screen. The 90-minute pilot movie will air on Syfy in its entirety at a future date."