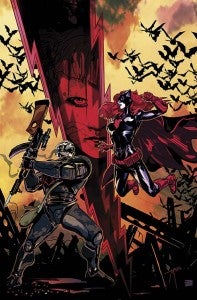 's Annual in April will give new Batwoman scribe Marc Andreyko an opportunity to wrap up some of the dangling plot threads from J. H. Williams III and Haden Blackman's acclaimed run on the title, which was truncated after DC Comics decided to give their replacement an early start so the title could tie into Batman's "Zero Year" event. When Williams and Blackman announced they were going to be leaving Batwoman as a result of irreconcilable creative differences with their editors at DC Comics, the comics community exploded into (yet another) debate about the role of editors and publishers versus creators at the Big Two. When non-comics media got hold of Blackman's original statement, DC's blanket position that their superheroes are not to be married was widely misreported as opposition to gay marriage specifically, since the Batwoman character is a lesbian, and created further controversy both inside of comics and out. Shortly thereafter, it was revealed that not only was Marc Andreyko going to take over the title, but that he would do so a month sooner than expected, meaning that Williams and Blackman wouldn't have the opportunity to write the final issue they were planning in their heads to end their run on the character. Andreyko, a writer whose talent for writing female superheroes is unquestioned, seems to have largely put most of the concerns to rest but the issue of Williams and Blackman's dangling plot threads remains. The pair were open with their dissatisfaction when their run was cut short, and many readers had followed the respected writer/artist team to the title and were dissatisfied when the award-winning team didn't have an opportunity to at least write a finale to their run. Blackman has moved on to Elektra at Marvel and Williams is doing Sandman for DC's Vertigo imprint, so they won't be returning for this issue--but at least giving some pages and effort to giving their run some closure may help satisfy some readers. Back in November, Andreyko announced that Batwoman Annual #1 would give closure to that story, with no clear indication as to when it would be released. That's April, according to Comicosity, who have a sneak peek at DC's solicitations, seen below. BATWOMAN ANNUAL #1 Written by MARC ANDREYKO Art and cover by TREVOR McCARTHY On sale APRIL 30 • 48 pg, FC, $4.99 US • RAT ED T+ Batwoman vs. Mr. Bones! Will the DEO triumph over Kate, or will she cross the line and free herself for good! Lingering questions are answered as long-standing conflicts reach their final resolutions.