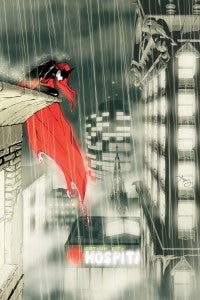 On the heels of death threats being made to Dan Slott over the final issue of The Amazing Spider-Man, threats directed at filmmaker James Gunn when Guardians of the Galaxy star Karen Gillan shaved her head and then threats made against the administrators of a Man of Steel Facebook page following the casting of Ben Affleck as Batman, it's arguably not surprising that the most recent controversy in the fan community has spurred threats of violence.

That's according to outgoing Batwoman co-writer and artist J.H. Williams III, who tweeted last night, "I've just been told that threats of violence have been issued toward individuals at DC comics. This is unacceptable. It needs to stop now."

Of course, the fact that he and his co-writer Haden Blackman are the supposedly wronged parties may not matter much--their departure, which took place after DC rejected a number of their planned stories including the marriage of Batwoman and her fiancee Maggie Sawyer, has generated a lot of attention from outside of comics, primarily with headlines like "DC Comics bans gay marriage."

In spite of Williams's protestations to the contrary, many fans are convinced that the move was because DC was reluctant to allow two homosexual characters to marry. DC, the creators and my own sources have all confirmed that, in fact, it's not about "gay marriage," per se, but about marriage in general, which DC believes limits storytelling opportunities and "ages" the characters.

As a result, it's likely Williams's request for fans to calm down may fall on deaf ears--or at least deeply disinterested ones who don't know who he or even Batwoman particularly is, and only got involved because of what's being portrayed in much of the press as a marriage equality controversy.