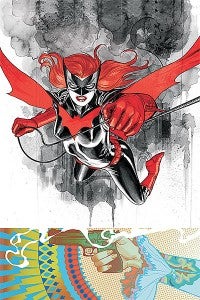 Batwoman, one of DC Comic's few openly gay/lesbian characters, has finally seen her day in the sun, or moon more appropriately. Taking off in this month's Detective Comics #854, Kate Kane has fallen into the gifted hands of writer Greg Ruka, artist J.H. Williams III and colorist Dave Stewart. Together, these three craft a cracking good story for Batwoman as she makes the jump to the main stage of DC's pages. Her appearance in Detective Comics couldn't be better. Right away her presence as a force to be reckoned with by the Gotham City underworld is made clear, as she forces a low-level crook to give her information about the arrival of the new leader of the religion of crime, a group that almost succeeded in ending Batwoman's career in crimefighting not so very long ago. Even new Batman Dick Grayson makes an appearance here, and it's safe to say that he doesn't seem to mind the extra support in light of recent increased criminal activity. Another thing that Rucka does well is to establish the personal side of Kate without it feeling forced and trite. We quickly see her version of the "Batcave", meet her faithful assistant, in this case her father, and even get to see a bit of the difficulty she has in the relationship department, all in a very natural, logical manner. One of the tricky things about establishing characters is how to make it seem as if we've known them all along, and Rucka does this beautifully by not insulting the reader's intelligence through forced exposition and dialogue. As Batwoman finally meets the new head of the Cult of Crime, she finds an intriguing woman in garish white makeup named Alice, who appears only able to speak in phrases and sentences from Alice in Wonderland. The story ends with a confrontation between these two formidable characters, and sets up an intriguing story arc for the next issue. Credit must also be given here to the artwork and coloring, as the illustrations themselves enhance and create a black, white and red backdrop that makes Batwoman's actions all the more intense and awe-inspiring. Add to that some creative panels and splash pages and you have a visually stunning work that compliments the narrative nicely. The second feature spotlighting The Question is also well done, with Renee Montoya establishing herself as a protector of the helpless and stymied. Someone in Gotham City needs to be there at the neighborhood and street level to assist the residents, and The Question looks to fill that bill nicely. This issue may be one of the closest things to a detective novel to come out of the comic book realm in quite some time, and that is no small feat. Judging by this first issue, Batwoman promises to make a smart, gritty addition to the Batman family and the DC universe.