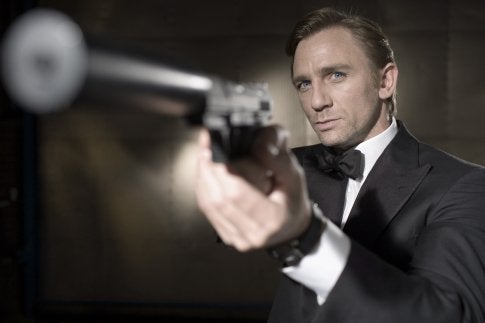 That's not a judgment on the quality of the James Bond writers--that's actually the mission statement put out there by a YouTube user whose handle is--you guessed it--James Bond.

The project, called 50 Years of James Bond: The Movie, takes a few minutes from each of the more than twenty pre-Skyfall Bond films currently available on video and cuts them together creatively to make a feature-length Bond film that is fairly coherent in its narrative, and stars every actor yet to play Bond (in the MGM canon; the first two swings at Casino Royale, for example, aren't in here).

You can check out the movie, which runs nearly two hours, below. Here's how they describe the premise:

Approximately five minutes from each of the 22 Eon produced James Bond films have been cut together, in order and in sequence, beginning with the first five minutes of DR. NO (1962) followed by minutes 5-10 of FROM RUSSIA WITH LOVE (1963), minutes 10-15 of GOLDFINGER (1964), minutes 15-20 of THUNDERBALL (1965), continuing on through each of the remaining 18 Bond features (accounting for variables in each title's running time) culminating with the final five minutes of 2008's QUANTUM OF SOLACE.

This fresh look at the "James Bond Formula" provides a new exploration of the evolution of the series into a filmmaking genre uniquely its own. With few exceptions, each title's transition into the picture that follows it is nearly seamless, creating a viewing experience that at first might serve to remind us "if you've seen one Bond film, you've seen them all," but looking more closely it is in fact an endearing homage to a character who single-handedly shaped modern cinema's action/adventure formula and who continues to leave an indelible mark on generations worldwide.

That it's acknowledged openly as an examination of the fairly predictable Bond formula is pretty remarkable coming from someone who clearly loves the franchise enough to put something like this together.