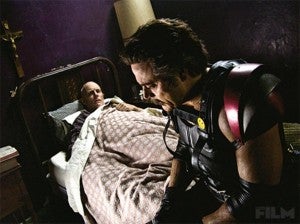 In a discussion at this weekend's Kapow! Convention in London, DC Co-PublisherDan DiDio shared with the audience some of DC Comics' reservations--and ambitions--about their forthcoming Before Watchmen project. Nestled among the quotes released in a statement by DC, though, seems to be a hint that what's already solicited might not be the only Watchmen tie-ins fans are likely to get. "Moloch is such a strong character, you wouldn't be surprised if he shows up in his own book at some time," DiDio told fans in attendance. That might not mean that Moloch stands the chance of getting a one-shot or miniseries this summer; DiDio hinted in an interview with The Guardian yesterday that it's possible, depending upon sales figures, that DC might go back to the Watchmen well again in the future. Not a lot of information was provided on Moloch, a supervillain faced over the years by various iterations of the Minutemen in the Watchmen backstory, but that hasn't been much of a barrier to DC so far. The idea seems to be that the concepts Moore developed were so iconic and enduring that the publisher and creators working on the prequels suppose they can come up with stories for the characters which, if not what Moore would have done, at least seem like a natural outcropping of the character. It's a philosophy that's not without its risks, as DiDio acknowledged at Kapow! "To say that we're excited would be an understatement," said DiDio. "To say that we're nervous would also be an understatement, but we're gonna let the work speak for itself."