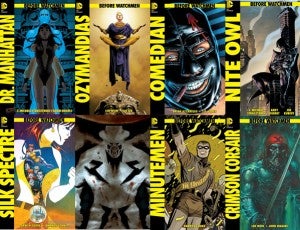 "Comic book prequels to the best-selling graphic novel of all time"--it's an interesting distinction, especially when made by DC themselves with regard to Before Watchmen, their much-anticipated and controversial summer event. And yet, that's how they describe the project for the uninitiated in a new TV commercial released earlier today.

It seems, in a way, to back up Watchmen writer Alan Moore's assertion that the comics are an unnecessary appendage on what was originally a single, complete story--and it differentiates the upcoming serialized, monthly floppy comics from the ones that comprised Moore and artist Dave Gibbons' comics masterpiece.

Unlike previous TV spots from DC, this one actually features narration. That's something that was a bit of a sticking point with many fans critical of TV ads for The New 52 when it launched back in September. The narration, though, doesn't tell much about the story of Before Watchmen, which remains shrouded in mystery.

Not for long, of course: Before Watchmen: Minutemen #1 will be in stores Wednesday.