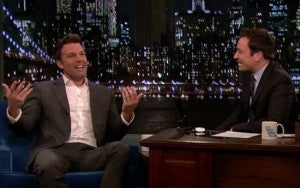 While the Internet has been distracted by the thought of Justin Bieber playing Robin, Ben Affleck has finally come forward to talk about being cast as Batman. In an appearance on Late Night with Jimmy Fallon on Monday night, Affleck said, “It’s so awesome, man. I’m so excited.”

After Warner Bros. initially called Affleck, he questioned if they really wanted to cast him, because he’s not 25 any more, However, Warner Bros. invited him to meet with director Zack Snyder to hear his plans.

“He has this incredible take on it. Obviously, he can’t do what Christian did. Those are amazing,” said Affleck. “And so he wants to do something different, but still in keeping with that. So I had to like…I thought this is a brilliant way to do this, and I really know how to hook into this.”

After Affleck agreed to do it, the studio talked to him about how the process can be trying. They showed him some Internet reactions to past castings. “I was like I’m a big boy. I can handle the Emmy snub. I can handle anything,” said Affleck.

Affleck continued, “I saw the announcement. I look on this thing. I look down at the first comment, Ben Affleck’s going to be Batman, and the first one just goes, ‘Nooooooooooooooooooo!’”

In regards to the story, Affleck explained, “Part of it is like when you see the materials and see the take, it’s going to be a hard thing to describe without giving away the story and giving away what it is. But I really feel like I have a lot of opportunities now, which is really great. This is something that’s really exciting.”