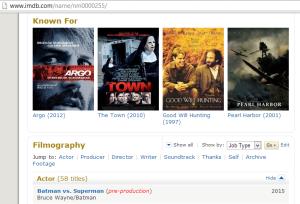 Social media is fun when it comes to things like the casting of Ben Affleck as Batman.

Fanboys of all stripes freaked out--whether they were happy or not--about Batfleck, the kind of reaction that's arguably not surprising considering that he's an actor who's been rumored for the role on and off for years, so people have had all kinds of opportunities to form their opinions.

Here are some of the best ones we found (disqualifying the same handful of jokes we've all heard a hundred times by now), and we'll add to it as we find more. This is certain to be a recurring thing over the weekend.

BOOM! Studios CEO Ross Richie: Dear comic book fans outraged about the casting of Batffleck: creative people are capable of surprising you. Ever heard the phrase, "Don't judge a book by its cover?" That's because a writer wrote the contents in a creatively satisfying way that belied the easily-judged exterior. Zack Snyder can surprise you. David Goyer can surprise you. Henry Cavill's rapport with Affleck can surprise you (can't tell you how many people told me they were surprised by Wahlberg's performance in 2 Guns and the way he played off Denzel). The resultant whole of all of these people bouncing off each other can surprise you. Just remember, back in the dark ages of the late 1980s fandom was outraged at the casting of Michael Keaton as Batman -- so much so they sent 50,000 letters to Warner Bros in protest. And that was back when people licked stamps and stuff and showing your discontent wasn't as easy as clicking an online petition... Maybe you're all right. But let's be supportive of creative people who are trying to do something cool. They could fail, or maybe they'll blow your mind...

Longtime DC and IDW writer Marc Andreyko: Ben Affleck, huh? well, i doubted Michael Keaton's casting and he was the BEST bruce wayne so far, so i'm keeping an open mind. (and worst case scenario: i get to see Henry Cavill beat the stuffing out of Ben if he sucks:) lol) 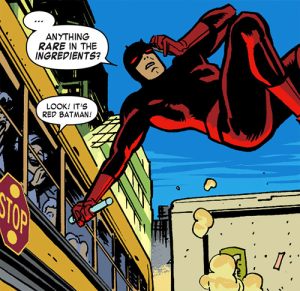 Why I Hate Saturn creator Kyle Baker: THEY'RE MAKING A MOCKERY OF THE STORY OF A BILLIONAIRE WHO DRESSES AS A BAT TO FIGHT EVIL CLOWNS! THEY'RE RUINING IT!

Quantum & Woody writer James Asmus: Based on your reactions I think I'm supposed to murder my child so he doesn't grow up in a world where Ben Affleck is Batman

Edison Rex writer Chris Roberson: Finding it difficult to muster an opinion about an actor cast in a movie I have no interest in seeing anyway...”

Arrow star Stephen Amell: Affleck will be awesome. They don't just hand huge / iconic parts out at random. (Except Rampage Jackson in "The A Team". That was awful.)

Savage Dragon creator Erik Larsen: Yeah, Ben Affleck as Batman doesn't phase me in the least. Okay, so Daredevil was a crappy movie but you can't pin that all on him.

Savage Dragon editor Gavin Higginbotham: Why do people hate Ben Affleck so much? He's made some cool movies. I'd rather a younger guy for a new franchise but screw it.

Veteran comics artist (and noted Man of Steel hater) Kevin Maguire: I have less problem with Ben Affleck as Batman than I do the writer and director of Batman Vs. Superman. As an excellent director of actors, I think Affleck can give added dimensions to Bruce Wayne , if they'll let him...and I think they will. As a recent Oscar winner, Affleck doesn't NEED this in his career so you know Warners is giving him some creative latitude. Either way, I did NOT see this coming. 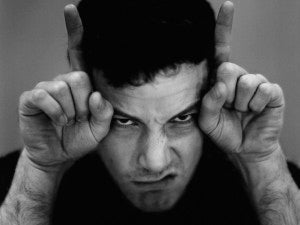 Kick-Ass creator Mark Millar: Ben Affleck will be a BRILLIANT Batman. Such a nice, intelligent actor. The backlash to his backlash is now complete. Love it!

Witchblade writer Ron Marz: Weirdly, I think I will SEE THE MOVIE FIRST before I decide if I like Ben Affleck as Batman.

Rob Liefeld: FTR I dig Affleck as Batman. He will be .....RAD

People outside of comics wanted to have their say, too. We already talked about Kevin Smith, but who else wanted to chime in? Well, just about everybody...!

Iron Man director Jon Favreau: I don't know how the rumor got started, but I am not playing Robin.

The Simpsons's Harry Shearer: In Russia, Batman plays you. #UpdatedSmirnoff

Mark Hughes (Forbes contributor and noted Batman superfan): Ben Affleck is a tremendous talent. A great actor & amazing director, we're lucky to have him as the new Batman. Affleck has won TWO Oscars. It's not some shocking position to say he's got talent & that people need to quit acting like angry children.

Wil Wheaton: Really looking forward to seeing Affleck bring the depth and gravitas to Batman that he brought to Daredevil and Gigli.

Jaws star Richard Dreyfuss: You read for a part, you feel good about it, you feel confident, then they cast Ben Affleck.

Joseph Gordon-Levitt: "I like Ben; he's a good actor." (quoted by numerous fans from a Don Jon Q&A)