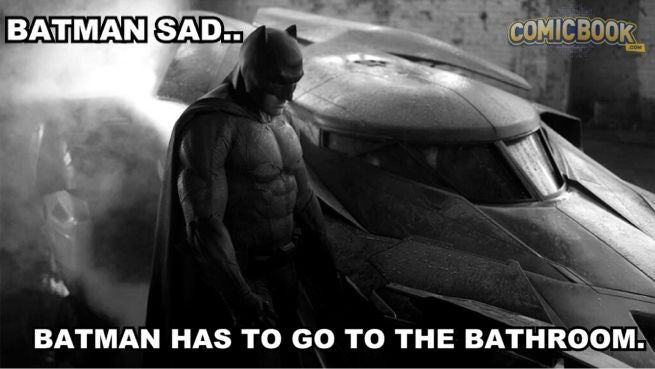 Playing a superhero in a movie isn’t always easy, especially if a celebrity has to wear a cumbersome costume. In the past, Michael Keaton has complained about the challenges he faced doing every day tasks when wearing the batsuit during Tim Burton’s Batman movies.

With Batman V. Superman: Dawn Of Justice, many thought things might be easier for Ben Affleck, given recent reports that he would be wearing a cloth batsuit. However, if a new report in The Daily Star is to be believed, it looks like Ben Affleck is the latest celebrity to find out just how tough it can be to be Batman.

Ben Affleck reportedly needs a whole crew of assistants to put the batsuit on or take it off. The entire process is said to take up to thirty minutes several times a day. The Daily Star quotes a film insider as saying, “The suit is extremely restrictive. Ben finds it hard to perform basic tasks and struggles to look natural. He’s also been complaining of problems with breathing, given how tight the suit is.”

But that isn’t the worst of Ben Affleck’s problems with the batsuit. Apparently, because of the long process involved in taking a bathroom break, the film insider states, “He’s constantly trying to avoid going to the toilet because it’s such an ordeal. The entire production has to stop and begin the tedious process of peeling the suit on and off. It’s not an ideal situation.”

Beyond just the humorous nature of Batman having BAThroom problems, the report is relevant for another reason. If the report is true, then it sounds like the costume might not be a simple cloth costume after all, and there could be many layers, parts, and padding involved to the costume.