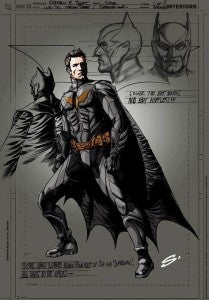 In the early hours of the morning, a piece of art reportedly showed up for sale on the Comic Art House Facebook page, featuring Ben Affleck in Batman garb, according to a reader who e-mailed it to us.

It has since been removed.

Considering how much fan art there's been made of exactly this subject, what makes this piece special? Well, it's by Steve Scott, a TV, film and comics artist who according to his DeviantArt site "was selected to draw the only adaptation to the 2008 Oscar winning film Batman The Dark Knight."

This, of course, coupled with a comment by Scott on the Facebook post that it was the wrong upload, briefly had some people thinking that it was a piece of legitimate concept art from the forthcoming Batman vs. Superman movie--but when you look at the captions, it certainly seems that's not very likely. "NO bat nipples!" One note reads, a nod to the notorious costume detail from the Joel Schumacher Batman films. At the bottom of the page, he follows up with "Ben wants no bat nipples."

That probably really doesn't need to be stated, and we can't imagine it showing up on an actual internal document for Warner Bros. It kind of screams "I'm having some fun with you here!"

That said, it's an interesting look at how one man affiliated with the Nolan trilogy perceives Batfleck to look--and we can always entertain the idea of a comic set in the Man of Steel universe that would see this version of the character interacting with Jerry Ordway's Superman and Supergirl.