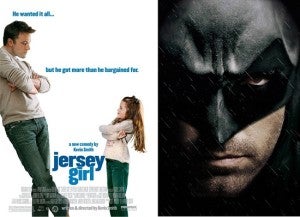 is one of the movies that Ben Affleck made during the period in his career that he'd probably like to forget--and one that came up an awful lot this week when Warner Bros. announced that he would play Batman in the sequel to Man of Steel.

Along with Daredevil and Gigli, Jersey Girl was one of the movies that came into theaters with high expectations and left in disappointment. As the lowest-rated film Kevin Smith has ever written, according to movie review aggregator Rotten Tomatoes, the film made just $25 million, failing to make its fairly modest production budget back in spite of the fact that Affleck and his wife/co-star Jennifer Lopez were huge stars and tabloid darlings at the time.

So maybe it's not surprising that Smith was the first one to remember--and subsequently Vine--the video below, showing Affleck--playing "Ollie," a character named after Green Arrow--describing the street sweeper he's driving as "The Batmobile."

Ben Affleck Drives "The Batmobile" In Jersey Girl...Kind Of