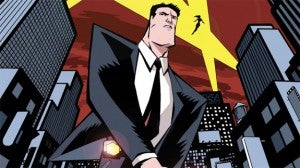 co-creator Brian Michael Bendis has responded to Latino Review's earlier report that a second Powers pilot has been completed and rejected by FX, denying virtually everything in the story. "Reports in Latino Review about the powers pilot are 100% false. Every name and fact are incorrect," Bendis tweeted earlier tonight, shortly after we reported on the initial rumors. Then he jokingly added, "Except for where they like my writing." As we speculated in our earlier report, a likely scenario seems to be that with a somewhat similar concept headed to ABC in the form of Marvel's S.H.I.E.L.D., FX wants to be sure Powers is as good as it can be, before announcements are made and the hype machine kicks back into gear.

As we've pointed out in the past, the rumor reporting at Latino Review tends to strike out as often as it hits a home run. While they've found themselves ahead of the curve on Marvel movie news, in particular, they've also made broad statements that turned out to be false. One of Bendis's Twitter followers pointed out that the site had claimed earlier this year that Black Panther would be Marvel's next non-sequel, solo superhero film. Obviously, that's not going to happen now that Ant-Man has been officially announced but most fans had lost faith in that rumor by the time Guardians of the Galaxy was announced, which technically didn't prove it wrong.

"Those who may doubt me on Powers: I'm the author of a book called Fortune & Glory about Hollywood and me," Bendis continued. "No problem telling it like it is." He concluded, "We've a ways to go to get Powers on the air but as I tweeted last week, good news JUST happened. Stay tuned. FX will announce stuff when ready." Don't be surprised if those announcements come sooner than later, now. Even if the rumor is quickly debunked, like this one, it's difficult to sustain fan enthusiasm following a long period of media silence followed by rumors of "cancellation."