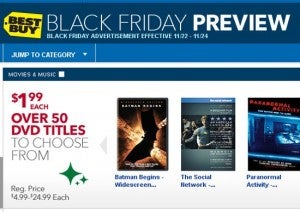 Best Buy has released an early preview of their Black Friday deals, and there are several deals which should be of interest to comic book fans. On the cover of the Black Friday preview is a collection of movies normally from $24.99 to $34.99, which are on sale for $8.99 each. Included in the cover preview is the Hunger Games Blu-ray and The Big Bang Theory Season 5 DVD for only $8.99 each.

Page 7 of the Black Friday preview features more movies, and there are some real deals for comic book movie fans. The Batman Begins DVD is priced at only $1.99, while Iron Man 2 Blu-ray and the original Men in Black DVD are priced at only $3.99 each. Captain American and Spider-Man 3 Blu-rays are priced at $7.99 each.

And there’s also a little something for comic book TV show fans as well. The Walking Dead: The Complete First Season DVD and Smallville: The Final Season are priced at only $9.99 each.

The Best Buy Black Friday advertisement goes into effect from 11/22 to 11/24. There are limited quantities on all ad items, and stores open at 12 AM on Friday.