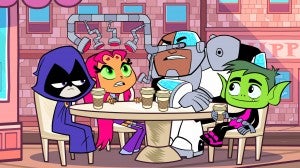 Warner Bros. Consumer Products have released a series of images promoting its upcoming DC Nation animated seires Beware the Batman and Teen Titans Go!, both of which are set to debut on the Cartoon Network later this year. The two series will replace the just-cancelled Green Lantern: The Animated Series and Young Justice. Fans have been fighting to keep those series on the air, with DC acknowledging the outpouring of support for the cancelled shows earlier today and asking audiences to give these new series a chance. 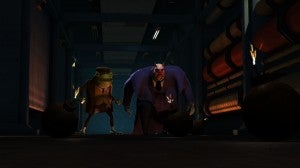 While Teen Titans Go! is marketed squarely at younger kids and is described as featuring a more comedic bent, Beware the Batman is an action-oriented series that had to go back and be toned down after the Aurora, Colorado theater shooting. Batman's partner in the series isn't Robin but the sword-wielding Katana, and Alfred is seen brandishing guns in promotional images for the show. Aside from skewing younger, it's interesting to note that the tone of Teen Titans Go! seems a bit more in keeping with the tone of the original Young Justice comics by award-winning comics writer Peter David, who played it a bit like the teenage equivalent of Keith Giffen, J.M. DeMatteis and Kevin Maguire's Justice League series. Those comics have been described as a "workplace sitcom with superheroes." 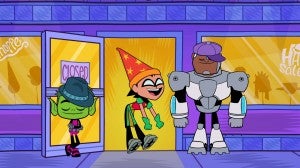 Beware the Batman is a computer-animated take on the Dark Knight that sees him facing off against some bizarre and hideous foes both new and old; Mister Toad and Professor Pig are pictured at right. Anarky, a sometimes-political villain mostly associated with Robin, will also appear in the series and Scarface and the Ventriloquist have appeared in promotional art.