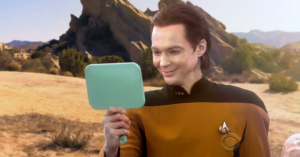 In a new, 20-second teaser trailer for this week's episode of The Big Bang Theory, Sheldon and friends are dressed as Star Trek: The Next Generation characters, getting their pictures taken at Vasquez Rocks, a Los Angeles-area landmark where several movies, including some episodes of Star Trek, have been filmed over the years.

Fans also get a look at Penny and company making their way into a comic book store, with the rather unflattering tagline that they're going "where no woman has gone before."

The episode airs Thursday at 8 p.m. on CBS.

Big Bang Theory Trailer Shows the Cast as Star Trek: The Next Generation