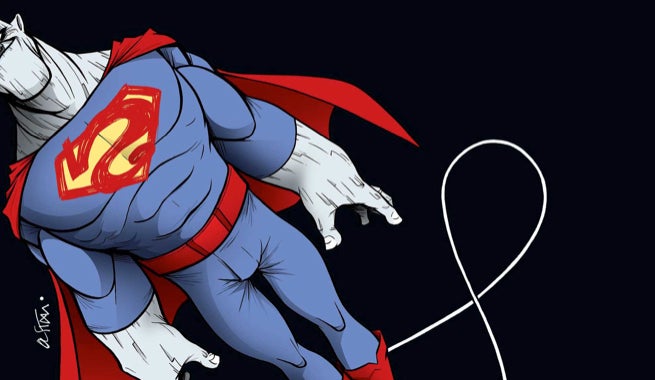 "DC Comics hate comedy and prove it with old series with worst pal Jimmy Olsen, not in Bizarro #1! It am not in stores today, so don't read it!"

Okay, Bizarro-speak is really difficult to write, so hopefully you got the gist of that. Yes, Bizarro #1 is in stores and digitally for purchase today, marking a new comedic side to DC Comics that has been seen in long while. Bringing the laughs is TV writer Heath Corson, who's previous DC credits include four direct-to-video films, including the super-serious Justice League: Throne of Atlantis and last year's ultra-violent Assault on Arkham.

Teaming with artist Gustavo Duarte, Corson throws Bizarro into the DCU alongside Jimmy Olsen. Stranded on Earth and displaced from Bizarro-World, Superman's twisted döppleganger just wants to be loved. To find it, and sets on a road trip with his "worst pal" for a meet-and-greet tour of the DC Universe.

With Bizarro #1 out today, we chatted with Corson about the story, writing in Bizarro-speak, and a special guest who will change the way Bizarro interacts with the world . Plus, scroll down for the entire 8-page "pilot episode" Bizarro sneak peek!

Heath Corson: (laughs) I know, the impulse is to go right into Bizarro-speak, which is really confusing.

Or is the impulse to not go into Bizarro-speak?

HC: Ohhhhhhh. Hoisted on my own petard already!

(laughs) But seriously, Bizarro-speak is hard to keep track of, even when you're just reading. What do you do to script in this manner? Do you write normally first, then translate into Bizarro-speak?

HC: I get myself into the mindset so that I can – I'm trying to write Bizarro dialogue as a little bit more colloquial. I'm trying to give him a little bit more of a vocabulary. Because of that, you have to be careful that you're not reversing every single thing in the line, you're only reversing like, the verb, or only something big like the intention. Otherwise, there are so many mental gymnastics to do with this character that it turns you off. He could become really annoying really quickly, and I want him to be endearing.

And I wanted to call out that it's confusing. There's a part where Bizarro, in the first issue turns to Jimmy Olsen and says, "Am you or amn'st you my worstest friend?" and Jimmy just goes, "Could you repeat that?" (laughs) And that just makes him more frustrated. He's just a big, silly guy who wants to be loved so badly. When people don't understand him it just frustrates him to no end.

The general premise here, "Bizarro and Jimmy Olsen go on a road trip," sounds like maybe a freshman improv class… "Gimme Two characters! What are they doing?!"

HC: (laughs) Yeah. It's a very out-there, crazy concept. But I really wanted to ground it in the vein of Planes, Trains, and Automobiles and Tommy Boy, and these sort of classic Road Trip movies where you have a natural, organic comedy team and you put them in new situations. I knew I wanted Bizarro, and I knew I wanted him to be grounded with some version of a straight man. I wanted that straight man to be invested somehow.

So putting these two characters together was really fun, because you have Jimmy, Superman's pal, now having to deal with Bizarro who's a pain in the ass but also – they're equals on this road trip. That's a different status for Jimmy; he's never had that before with Superman. He's always, you know, the guy Superman is saving. With Bizarro, he's actually – he loves Jimmy, thinks he's the smartest guy he's ever met! Jimmy's the brains of the operation and Bizarro is the brawn. So it ends up being a really natural pair.

It's interesting that you call Jimmy the straight man, since he's played the comedic relief and the punch line for last 70 years. How much change did it take to flip Jimmy's character on his head?

HC: Jimmy, and all these characters are pretty elastic because they've ben around for 75 years. So it's really sort of the Jimmy of the 1950s and 60s, where every month in Action or Superman, Jimmy would be glugging some new radioactive potion from a scientist and turn into Elastic Lad or Giant Turtle Boy, just something crazy and bizarre. I wanted to sort of go back to that guy. Also, Jimmy, we found out in the 8 pager and say it again in issue 1, Jimmy has visions of fame and fortune with this. He really thinks that if he can take pictures of the two of them on this journey, he's going to come out with a coffee table book, and then boom, instant fame and fortune.

Yeah, I liked how dismissive Clark was to Jimmy with the "Oh yeah, get a coffee table book out of it!"

HC: Yeah, I think Clark means it as a joke, and then Jimmy's like "I can do that, this is a good idea!" 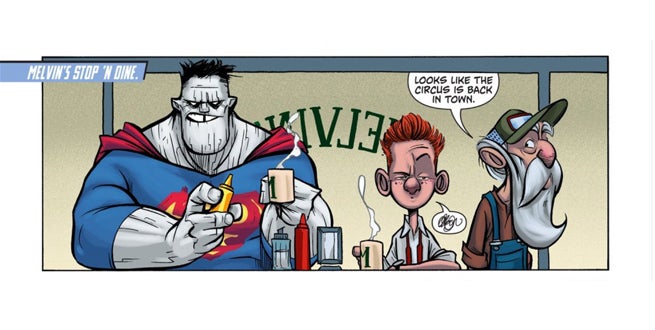 HC: Well, for starters, there aren't a whole lot of them. It's fun to have a book that looks completely different at the hands of Gustavo Duarte and reads completely different. That's a lot of fun, to be able to play in this sandbox where editorial, to their credit, hasn't told me no, that I couldn't have someone or couldn't do something in the DC Universe. They've been super supportive; even when I've questioned them and asked, "Are you sure I can have this character?" They just laugh and say, "It's Bizarro! It's not like you're breaking these toys!" That's been really wonderful, to play in the sandbox, have all the toys in my sandbox, and just, Gustavo and I run amok with it, and we're having a ball!

The Sneak Peek system this month has been interesting, seeing these short stories come out first…

HC: I have to say, it's been great. I've read every single one of them, because I'm a fan, and there were books that I was really surprised by, going, "oh my gosh, I've gotta get this!" There were some that I knew were going to impress, and then there were some that came out of left field. Doctor Fate looks awesome! There was some great stuff that popped up and I'm just like, "Sign me up!"

And the response to the Bizarro one was great. People were able to see the "pilot episode," and deliver the tone we were dealing with, and show what the art would be like. And again, I cannot say enough nice things about Gustavo. What a fantastic creative partner. I'm wrapping my mind around the fact that the story and dialogue are just a delivery system for Gustavo's art: just inject it right into your eyes because it's so fun.

Was it liberating then, getting to put out an actual story, rather than the standard 3-4 page preview that's just the start of a 20 page story?

HC: Definitely. Oh my gosh! Truth be told, I don't know how everyone else was approaching it, but for me, coming from TV, I just treated it like a pilot. Here's my pilot story, let's show you what the premise is, let's get them on the road. Then in the first issue we do a flashback page that shows you that information again, but in the vein of Bizarro being a little all over the place, we tell it differently. There's new dialogue, new jokes, new stuff, so that someone who read the 8-pager wouldn't think they'd read it already.

Bizarro's not the most reliable narrator!

Obviously you're going for a humorous approach here, but you mentioned you want Bizarro to be endearing. So, how will your Bizarro be more than just a punch line?

HC: Bizarro is, here's how I tied into Bizarro: he's me in middle school. He's doofy, he's nerdy, he desperately wants to be loved. He wants to do the right thing, but he's so klutzy and annoying that it's really hard for people to love him. That's all he wants, friends and to be loved, and for everyone to adore him. That kind of character that's just a raw nerve ending is so much fun! You want to cuddle them, but at the same time just saying, "get out of my house, you're just the worst, dude!" The minute you give Bizarro an inch, he takes a mile. That's what the push and pull with this character is, you can't be nice or feed the strength of Bizarro, because he will move in, he'll sleep on top of you, and he'll eat everything.

Do you have a particular moment or interaction with a guest star that you're really excited for readers to see?

HC: Yes, I can tell you that in issue 2, we do a little road trip through the DCU with stops at Gotham City, Central City, and Starling City. Issue 3 is going to be a cowboy wild-west story. Issue 4 we will find ourselves in Branson, Missouri, where a certain touring magical act is passing through…

All right, so we'll have Bizarro-speak and Backwards-speak on page at the same time (laughs)…

HC: Well, let's just say, Bizarro understands what she's saying! And he ends up becoming a very powerful magician in his own right! (laughs)