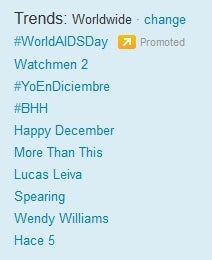 Is it true that superstar Flashpoint artist Andy Kubert is going to be drawing a Nite-Owl series, a prequel to Alan Moore's classic Watchmen? According to Bleeding Cool (who today updated the story to reflect rumors that Kubert's father, legendary artist Joe Kubert, will collaborate with him), it is - and just the report was enough to propel the story to the top of Twitter's "trending topics" yesterday, both in the US and worldwide. While Comics Alliance has made fun of Bleeding Cool for taking unconfirmed tips from anonymous sources and turning their stories into front-page news (in other words, for being Bleeding Cool), they've had a little fun with it themselves, showing some screen grabs from various creators' Twitter accounts talking about the potential project. Despite their snarky tone, though, Comics Alliance has one thing right (even though they were kidding): Probably the biggest part of this whole story is the fact that it took over Twitter for a while. As the social network du jour, it generates buzz in a way that direct advertising or issuing a press release can't--kicking off mainstream news stories and resulting in the kind of buzz outside of the comics industry that you can't buy. Consider that despite dominating the comics-news cycle for months and being recently named by Advertising Age as one of the hottest brands in America as a result, DC Comics's New 52 initiative never made it that high on the little list that millions of users see next to their Twitter feed. The story, which builds on previous rumors reported by Bleeding Cool and elsewhere that there will be a handful of Watchmen prequel miniseries in 2012 originating from a number of creators and orchestrated by superstar artist Darwyn Cooke. Names like John Higgins, J.G. Jones, J. Michael Straczynski and Watchmen co-creator Dave Gibbons have been bandied about in rumors, although none of them have either confirmed or denied anything and DC has consistently refused to comment on the claims. Bleeding Cool and MTV's Splashpage built a fairly sturdy house out of circumstantial evidence to back up their claims at the end of October. Today's rumors suggest that while both Kuberts may be working on a Nite Owl miniseries, while Bleeding Cool's sources seem to be soft-pedaling the degree of Dave Gibbons's involvement but seems to suggest that there's a possibility of more to come if the initial miniseries succeed.