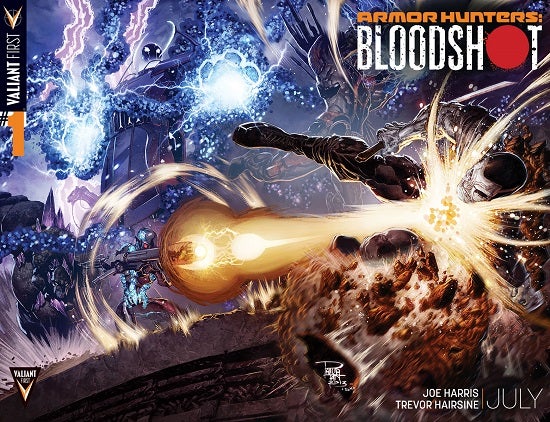 With the announcement this morning of the Valiant First program, Valiant Entertainment brought news of Armor Hunters: Bloodshot and Armor Hunters: Harbinger, two stories which, taken together, led some readers to believe that Bloodshot and H.A.R.D. Corps will draw to a close sooner than later. Now the publisher have confirmed that news to Newsarama in an interview. Harbinger and Shadowman, despite having mini-series spinning out of their pages, will continue on. Valiant's CEO Dinesh Shamdasani confirmed that Peter Milligan has plans for another 12-18 monthsof Shadowman beyond the "End Times" miniseries. Valiant has proudly declared themselves as a creator-driven publisher, and Bloodshot has been the only title on which they've lost a writer and then radically shifted focus since the company relaunched two years ago. A second retooling may have seemed excessive when, instead, the character could simply be shelved for a short time while they find the next mind they want to shape the character's future. 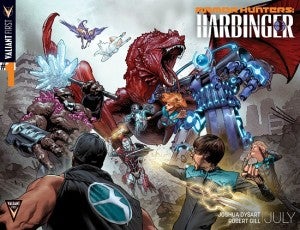 "Bloodshot will move into Armor Hunters. But that's the nice thing again about having the longterm writers. We're nearing some of the milestone moments they were already building towards for a year or two years. So when we switch things up when they hit these milestones, when you see some titles come out and some new ones come in, it's happening because of what was planned," Shamdasani explained. "The beauty of the Valiant Universe, and what these guys in the 90s created, Layton, ad Smith, and all those guys, it's such a large, robust universe. We still haven't even touched so many elements of it. We want to continue to expand, but we want to keep the universe as small as possible, so that one, if you want to read everything, you can read everything – we don't want to gouge the consumer. Two, it's so we can keep the quality high, make sure that every issue of every title is as strong as it can be. We'll keep ourselves to nine core titles for this year." The next Bloodshot and H.A.R.D. Corps arc, which will cross over with Archer & Armstrong, is "Mission: Improbable." Whether there will be a wrap-up story after that, or whether "Improbable" is the final story of the series, isn't yet clear.

Bloodshot and H.A.R.D. Corps To End, Lead Into Armor Hunters