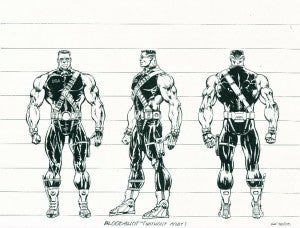 With The Amazing Spider-Man due to hit from Sony this summer and fan enthusiasm seeming to point in the direction of a pleasant surprise in terms of its box-office draw, it probably isn't surprising that the studio would entertain the notion of picking up another comic book franchise.

What's a little more surprising is that the one they picked is Bloodshot, the once-and-future Valiant Comics title. The studio bought a spec script from writer Jeff Wadlow, meaning that the script was written with no promise of payment and no deal in place. According to Deadline, Wadlow was simply a fan of the original comics series, which ran for six years in the '90s, and decided to give the script a try.

Wadlow's last major feature film as a writer was 2005's Cry_Wolf, although a few years after that he directed Never Back Down, starring Amber Heard and Djimon Hounsou. Bloodshot will be produced by Neal Moritz (I am Legend) and Jason Kothari. Recent rumors that X-Men: First Class director Matthew Vaughn would direct a Bloodshot feature are apparently unrelated to this iteration of the film, according to Deadline.

Bloodshot revolves around a heartless killer who is turned into a perfect killing machine when microscopic techno-organic devices are implanted into his bloodstream, wiping out his personality and memories and filling him with the skills and motivation to punish the criminals who betrayed him, as well as heightened reflexes and a healing factor.

Valiant Comics have been out of print since 2005, when Acclaim Comics (who had purchased the rights to publish Valiant characters) declared bankruptcy and closed up shop. The ownership has been in dispute since 2007, but the conflicts were recently resolved and the publishing line will relaunch with new #1 issues beginning with May's X-O Manowar #1 by Robert Venditti and Cary Nord. That issue will feature the first-ever "talking" comic book cover, one of the variants available to comic book retailers, and Valiant will tease more new titles featuring their characters in a Free Comic Book Day release the first weekend in May. Bloodshot is expected to be one of the characters involved in the publisher's relaunch but no official comment on the character has come from Valiant yet.

Bloodshot Movie in the Works at Sony

Disney Releases First Trailer for Raya and the Last Dragon

Fortnite Brings Back Fortnitemares With a Twist