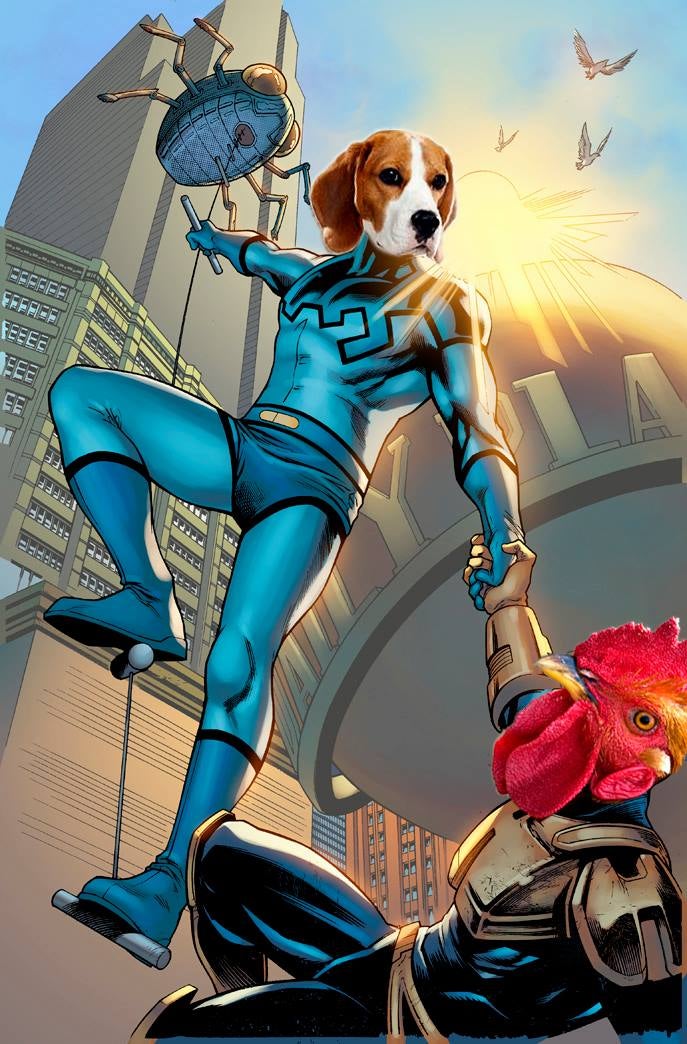 In possibly the weirdest way possible (no -- really), DC Comics Co-Publisher Dan DiDio seems to have confirmed that Blue Beetle Ted Kord and the older, armor-wearing Booster Gold seen in the New 52 and Futures End will reunite during the company's upcoming Convergence event.

In an image featuring an art style that certainly looks similar to the cover from Convergence Week Four: Booster Gold artists Alvaro Martinez and Raul Fernandez, DiDio posted a joke page to his Facebook account, showing Blue Beetle and Booster Gold with animal heads Photoshopped onto their bodies.

"Rooster Gold and Blue Beagle, one of the worlds rejected by Telos of Convergence," joked DiDio.

David Macho, an art agent and editor, commented that "I know that page," which DiDio "liked." Macho seems to have a relationship with Martinez, per a number of recent tweets promoting Martinez's work.

Of course, joking aside, this tells us some things about Convergence that we didn't previously know. Blue Beetle here doesn't appear to be on his own Earth, since that world would likely not have a Daily Planet building (he was last seen on a world that resembled the old Charlton Comics universe, along with other characters DC acquired from that now-defunct publisher, during Futures End: Booster Gold #1).

Whether that means the other-Earth Blue Beetle travels to the world in which Booster is being kept or that the Blue Beetle of that Earth somehow survived isn't clear.

This also wouldn't be an old image that this reporter simply doesn't recognize. Ted Kord has only ever shared a single panel with this version of Booster Gold before -- in Futures End: Booster Gold. That issue saw Booster careening out of control through DC's Multiverse, before ending up "home" in the pre-Flashpoint DC Universe. The armored costume -- generally depicted with an A.R.G.U.S. emblem on it, although not here -- first appeared in the Justice League International Annual #1 in the New 52, meaning that Ted Kord was not a superhero and shared no history with Booster Gold when that look debuted.

It's likely that this Booster Gold is the same one who, in a different uniform, lent guidance and occasional surreptitious assitance to his younger self and his son Rip Hunter during Booster Gold Volume 2. That "Older Booster" was last seen just before Flashpoint during the Time Masters: Vanishing Point miniseries tied to the Return of Bruce Wayne event. That version of Booster would have been the one whose younger self worked extensively with Blue Beetle on the JLI and later the Justice League America.

Currently, the pair of old friends and former Justice Leaguers are working together in Justice League 3000...but that doesn't take place in the "regular" DC Universe, but instead in a similar universe where Keith Giffen and J.M. DeMatteis' humor-tinged, nostalgic take on the Justice League International is the standard. That world is a version of the pre-New 52 DC Universe, but one in which (among other things) Ralph Dibny isn't dead and Max Lord never went evil.

Blue Beetle and Booster Gold to Reunite In Convergence