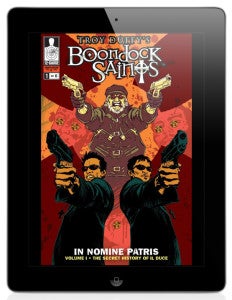 ComiXology announced this week that 12-Gauge Comics have made their Boondock Saints comics available digitally across the various formats ComiXology's app supports. Starring Sean Patrick Flanery and Norman Reedus, the film became an instant cult hit and made the pair of them into household names--if your household loves offbeat indie films. Even with Reedus's massive mainstream success on The Walking Dead, the pair are working with creator/director Troy Duffy to develop a third film in the action series. "I'm thrilled to have The Boondock Saints comics come to comiXology because they capture all of the exciting, intense, and poignant moments of The Boondock Saints with their cool Guided View reading experience," said Duffy. "ComiXology really has a cinematic way of presenting comics." With art by Toby Cypress, Guus Floor and Chris Brunner, the comics have been met with a big hit with fans of both comics and of the films. 12-Gauge publisher Keven Gardner hopes that digital release through the biggest online comics marketplace will take the series to a wider audience than ever before. "Working with Troy Duffy and this great group of creators has been an amazing experience," said 12-Gauge publisher Keven Gardner, "and by partnering with comiXology we'll be able to get these new stories in front of Boondock fans all over the world." "We're really excited to have comics from the original creator of the cult-classic movie The Boondock Saints on comiXology and this speaks volumes about the eclectic and ever-growing library of comics available all-day everyday on our platform," said Chip Mosher comiXology's VP of Communication & Marketing. "Now The Boondock Saints fans worldwide will be able read these new adventures on comiXology's platform."