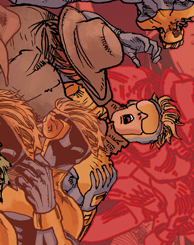 A lot of fans have speculated that if there's a key to "undoing" the New 52 and bringing back the pre-Flashpoint status quo, that key is Booster Gold. After Crisis on Infinite Earths, after all, DC left a single in-universe character locked away in an asylum, remembering the era before the Crisis but unable to either cope with it or convince others that it was real. That character was Psycho-Pirate, and he played a key role in Infinite Crisis, the story that set the stage for the return of the DC Multiverse. Certainly I don't hold much stock in the idea that DC left Booster Gold as an open door back to the old days--but it's absolutely true that Booster might hold within him the memory of the pre-Flashpoint timeline. I'll explain: Booster was outside of time when the universe reset during Flashpoint, having been shunted to Vanishing Point (his Time Master headquarters on the edge of the timestream) just as it was happening. This is because Booster was the only DC hero besides The Flash who actually went to the Flashpoint universe and was seen to emerge again (as noted in the comments thread below, Kid Flash also went but we never saw him return). As a guardian of the timestream, he detected that something big had happened, and went to investigate it. 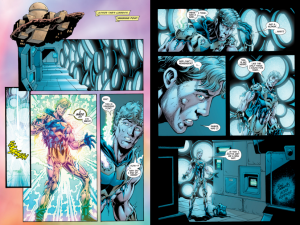 After having returned with his costume shredded and body bloodied from a battle with Doomsday, though, we saw him gradually lose his memory of what had just happened (and apparently more), before announcing to no one in particular that he needed a new suit. So, that's pretty cut-and-dry, right? He doesn't remember. But it's not quite that simple. "I think it's fairly clear Booster remembers being a Time Master because he recognizes Vanishing Point," former Booster Gold writer/artist Dan Jurgens told us back in 2011. "He wasn't confused by where he was… only how he got there. His reason for going there and methodology used are what puzzle him." In Justice League International Annual #1, a slightly older version of Booster Gold came back from the future, where he apparently worked with A.R.G.U.S., arrived and, among other things, referenced working with Rip Hunter. That's interesting because during Booster's Time Master days in the most recent volume of his solo book, Rip Hunter was his immediate supervisor (and, unbeknownst to Booster, his son due to the magic of time travel). 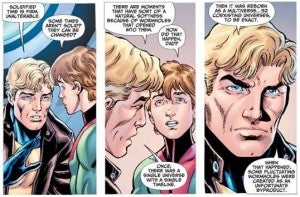 That version of Booster seemed, to those of us who had read it, to coincide with an older version of Booster who had appeared periodically during his solo title, and the Time Masters: Vanishing Point miniseries that ran alongside the Return of Bruce Wayne event. That older, wiser Booster (pictured at right) was the one who was the father of Rip Hunter, and frequently appeared at key moments in the story to secretly advise Rip, or to quietly influence events without being noticed by his younger self. In Booster Gold, Volume 2, the older Booster was THE Time Master, with the secrets of the universe laid bare for him. It's pretty obvious, then, why seeing a version of that character had led many fans to wonder whether, when Booster reappeared after vanishing in the JLI Annual, he might come back with a more advanced understanding of the DC Multiverse. That the Booster Gold of the New 52 seems to be actually, physically the same person as he was before Flashpoint is what makes so many possibilities for interesting storytelling. Other than Booster, it's only Barry Allen who was his same old self, but even he was never totally outside of the timestream during the changeover.

Fast-forward to the current day, though. Crave Online just posted a preview of the next issue of All-Star Western, and in it, Booster Gold and Jonah Hex are toppling through the timestream. As they do so, we see some alternate versions of the characters, including the one at left and the one at the top of the page. At left, of course, we get what looks to be part Booster, part Jonah--wearing Booster Gold's trademark disco collar (an element of most of his costume variations from his creation in 1985 until he was redesigned by Jim Lee during Infinite Crisis). And above? Well, if you look carefully you'll see that he's got wrist blasters on his costume, not unlike the ones you can see in the two-page splash from the pre-Flashpoint Booster Gold series above. The pre-New 52 gauntlets are an interesting touch considering that the rest of the "variants" seem to be just themed versions--a pirate Jonah, stuff like that. Giving him such distinctive characteristics from a previous Booster Gold costume will likely set off some Spidey-senses among the fans... ...but probably without good reason. After all, as you can see in that same two-page splash, he wore that costume back from the Flashpoint Universe and has already seen himself in it. Given that he was unsurprised to see it, it's probably a safe assumption that he has used that costume at some point during the New 52's as-yet-untapped history.