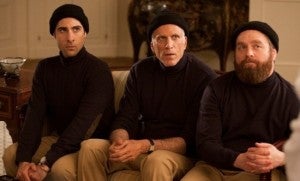 HBO is reportedly moving forward with plans to develop a feature film based on their cancelled series Bored to Death with an eye toward a theatrical release. The series, based on the writing of Jonathan Ames, was cancelled just over a year ago. It was a neo-noir story about a struggling writer (also named Jonathan Ames) who became a self-styled, unlicensed private detective in New York City.  It's got a comic artist at the heart of it and ACT-I-VATE member Dean Haspiel won an Emmy both for designing and animating its opening credits. The series starred Jason Schwartzman as Ames, Ted Danson as his old-fashioned, pot-and-booze-addled editor and Zack Galifianakis as his buddy the comic book artist. All three are reportedly back for the feature film. Whether Dredd 3D star Olivia Thirlby, who played Ames's ex-girlfriend on the show, might return hasn't been discussed publicly. "Jonathan, Ray, and George reunite to fight crime, commit crime, lose their minds and fail at love in a Bored to Death feature-length slapstick adventure," the film's logline reads according to The Hollywood Reporter. THR also says that Ames will write and executive produce the project, while Sarah Condon andStephanie Davis, who worked on the show, also will exec produce. "I think Jason becomes a policeman, which means, for him, a traffic cop. He'll have a traffic-cop go-kart kind of thing. And I think Ray and I move in together, both of us without relationships. And then: hijinks. All hell breaks loose. That's about as much as I know," Danson recently told The Wall Street Journal. "Lord, yes, I'm on board." Back in June, when Danson let slip that the movie was in the works, HBO downplayed the project, saying that it was merely being considered and at "a very early stage."