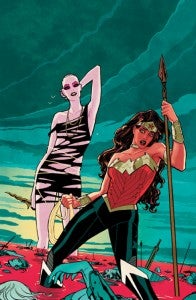 At a smaller convention, somewhat less inhibited by high-ranking DC executives in their midst, a group of creators at yesterday's DC Comics panel at the Boston Comic-Con revealed quite a bit of new information about the world of the New 52, according to a report from DC Women Kicking Ass.

The top news story coming out of the panel--which featured Jamal Igle (The Ray), Cliff Chiang (Wonder Woman), Ivan Reis and Joe Prado (Aquaman) and Francis Manapul (The Flash)--was the confirmation of the "zero issues" reported last week. The report characterizes the stories being told as elaborating on the characters' backstories prior to their first issues last September, and says that, "At one point there seemed to be some confusion about whether it had been officially announced by DC. Reis and Prado admitted they had just heard about it."

What that means for rumors that current Superman co-writer Keith Giffen may soon be taking over Legion of Super-Heroes is unclear. Also, just as a devil's advocate, what will Blue Beetle do, given that we saw his origin unfold in #1? Are there other DC books with similarly hard-to-prequelize first issues that we're simply not thinking of?

Apparently one of DC's best-selling and critically-acclaimed books had the hardest time getting what it wanted from the reboot. According to Francis Manapul, he had wanted to include Wally West, Ray Palmer and Ralph Dibny as supporting character in The Flash but was shot down every time. While Palmer has gone on to appear in Jeff Lemire's Frankenstein: Agent of S.H.A.D.E., so far neither West nor Enlongated Man have appeared in the world of the New 52. The exclusions were reportedly a result of a DC first principle to focus on the core characters in any given book, and Manapul conceded that Wally West presents a unique challenge because, according to the publisher, “once you introduce Wally, the audience is then going to be waiting for him to become the Flash.” Manapul reportedly tried to "sneak" the character into the book, but was rebuffed by the publisher and had to remove him.

Something else the publisher asked to have removed from the art after a book had already begun? Wonder Woman's pants, according to Cliff Chiang, who said he was a month into the book by the time he got his first feedback regarding the controversial costume change. Other than that, the artist said, he was not involved with Jim Lee's redesign of the character's costume.

Cruise on over to DCWKA (linked above) for much more, including how Reis and Prado ended up on Aquaman (it's probably not how you think) and a little discussion on how women are depicted in the New 52. Thanks to them for doing all the heavy lifting.

Harriet The Spy Animated Series Picked Up By Apple TV

When Is Fall Guys Coming to Switch, Xbox, and Mobile Phones?

Jujutsu Kaisen Will Be Available to Watch on Crunchyroll