It's probably not surprising when actors known for their work in Hollywood's superhero adaptations turn out to be in other big hits; after all, Hollywood tends to typecast people, and most of the highest-grossing films in any given year are tentpole, franchise action and fantasy films.

Still, it's curious to note that at a time when there haven't been any superheroes at the multiplexes in a few months and won't be for another six weeks or so, the top four movies at the U.S. box office all star actors known for their work in comic book adaptations.

The top movie so far this weekend, and projected to hold at that point, is Oz the Great and Powerful. Last week's #1 movie by a wide margin, the film stars James Franco, who broke out as a star following his work in Sam Raimi's Spider-Man films. 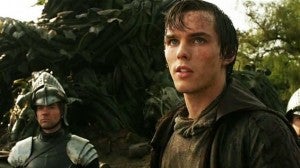 The week's #2 movie is The Call, a suspense film about a 911 dispatcher that stars X-Men star Halle Berry (who will be returning to the franchise in next year's X-Men: Days of Future Past). The third-highest-grossing film of the week is The Incredible Burt Wonderstone, which is kind of a two-for-one, since it features both Jim Carrey (star of The Mask and the upcoming Kick-Ass 2), but also Ghost World's Steve Buscemi. Jack the Giant Slayer, starring Nicholas Hoult (X-Men: First Class) and directed by Bryan Singer (X-Men: Days of Future Past), comes in at #4, followed by Identity Thief, which features Iron Man director/actor Jon Favreau. The sixth-biggest movie in the U.S. this week is Snitch, which stars Jon Bernthal from AMC's The Walking Dead.

That's pretty impressive, but then it tapers off a bit. The #7 and #8 movies (21 and Over and Safe Haven) don't have any of our comic book favorites in them...although the week's #9 movie, The Silver Linings Playbook, stars X-Men: First Class actress Jennifer Lawrence and #10 (Dead Man Down) has Colin Farrell, who starred in Daredevil.

Box Office: The Week's Top Six All Have Comic Book Movie Stars In Them