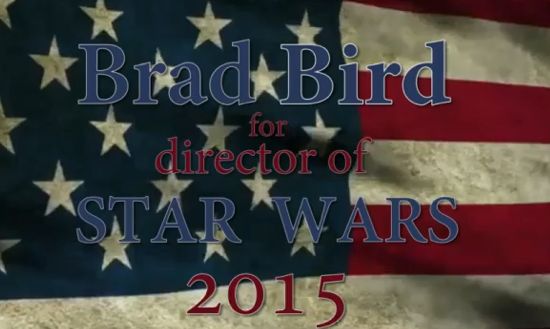 There have already been quite a few rumors that director Brad Bird could be in the running to direct Star Wars Episode 7. One online conspiracy theory that we’ve covered here at Comicbook.com has the 1952 movie being written by Damon Lindelof and directed by Brad Bird as just a cover name for Star Wars Episiode 7.

Now, the people at the Unlearning Channel don’t want to take the rumors for granted, and they have actually put together a campaign video in hopes of ensuring that Brad Bird gets the job. As the Unlearning Channel points out, “Now that two of the most important events in our lifetime have happened, Disney’s acquisition of Lucasfilm and to a lesser extent the Presidential election, we the people of the United States should make our voices heard, and we should already be looking ahead to 2015 and nominate Brad Bird for director of Star Wars.”

The video offers a number of answers to the question , “Why Brad Bird?” One of our favorites is “Because Star Wars should go to a director who has never done anything wrong in the history of forever.”