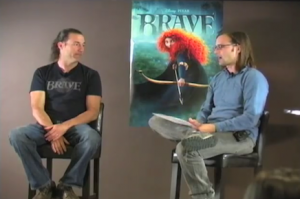 With Brave taking cinemas by storm this weekend, the film's director--Pixar veteran Mark Andrews--has a new Google Talk available, discussing the challenges and triumphs specific to making this particular Pixar film, which has been several years in development. You can see the talk below.

Andrews has been busy this year, not only wrapping Brave but also serving as the second unit director on the cult-favorite box office flop John Carter. He's previously served Pixar as a story supervisor on Ratatouille and The Incredibles and was nominated for an Academy Award as the co-director and co-writer of the Pixar animated short One-Man Band.

He co-directed Brave with Brenda Chapman, who directed Prince of Egypt and has worked on films like The Lion King and The Incredibles for Disney.

Disney-Pixar's Brave is in theaters now.