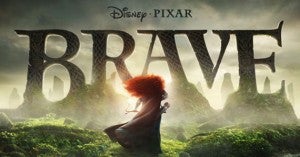 Disney-Pixar's Brave dominated all competition at the box office on Friday, taking in over $24 million and roughly equalling the rest of the top ten movies at the box office combined, according to Box Office Mojo. That puts the adventure-comedy on track to be Pixar's 13th straight film to open at #1 at the box office.

Princess Merida's story actually made about a million and a half more dollars on its opening day than Disney-Pixar's award-winner Wall-E did, putting it roughly on pace to meet expectations that saw it opening around $65 million.

Coming in at #2 was Abraham Lincoln: Vampire Hunter, which made $6.3 million, meaning that it's just slightly off pace to make its expected $17 million this weekend. Behind the supernatural historical mash-up was Madagascar 3: Europe's Most Wanted, last week's #1 film, which made just over $6 million and is still well ahead of the pace set by Madagascar 2 during the same period in its release. Prometheus and Rock of Ages rounded out the top five.

Brave on Pace to Win the Box Office Easily