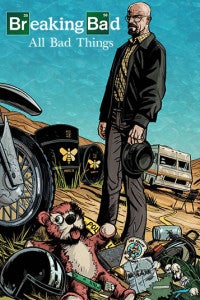 A digital comic book that provides fans with a recap of the events of AMC's hit show Breaking Bad ahead of the final episodes airing soon has just released its first issue online.

Written by Gordon Smith and Jenn Carroll, with art by Steve Ellis, the issue gives new viewers the bare bones of what they need to know just to understand the hit series--although obviously when communicating only the events of a story like Breaking Bad, you miss a fundamental aspect of what makes it great and what makes it work.