Sometimes, when a given event is the only thing people are talking about, you've just got to lean into the skid and accept it. As such, we've got a few Breaking Bad-themed articles that we'll be slipping in today with our regular coverage.

The series, which has been a big presence at San Diego Comic Con International for the last three years, is a favorite among creative types in the film and comics community--so there's been a lot of interesting discussion about what to expect from tonight's series finale on social media this week.

We decided to grab up some of the most interesting or entertaining comments made by comics professionals and comic book moviemakers today (and a few from earlier in the week that got retweeted today). Check 'em out below.

Guardians of the Galaxy director James Gunn: "Checking Facebook since I won't be able to watch the Breaking Bad finale until tomorrow night when it goes up on iTunes in the UK. God knows I won't be able to check social network sites tonight or tomorrow unless I want my eyes to bleed from spoilers.

"If you have thirty-seven-hundred questions about who's playing Thanos and what Yondu's headpiece is, history would lead you to believe that here below a Breaking Bad comment is the proper place to ask them."

Rambo creator David Morrell, who has a Spider-Man story upcoming: "Tonight's the much anticipated finale of BREAKING BAD. This morning, I was impressed by the quality of Salon.com's articles about the series, making an excellent case about why it's one of the most well-crafted TV series ever. I love the comparison of Walt's meth empire to the U.S. banking system."

Matt Forbeck: "So how would Breaking Bad have gone if Walter White had run a crowdfunding campaign instead? Would he still have to promise meth to backers?"

Simon Pegg: "I gotta go spend a day in the sky and by the time I land the #BreakingBad finale will have aired, so I'm on a tweet break til Tuesday. Bye."

Warren Ellis: "Finally caught up on #BreakingBad . Aaron Paul's going to make a great Batman in the last episode." 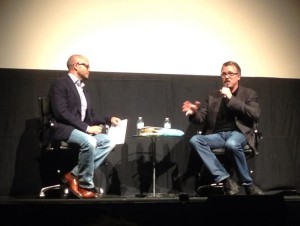 Brad Bird, director of The Incredibles and Tomorrowland: @DamonLindelof Q's & Vince Gilligan A's at VIFF's BREAKING BAD event. Meth & cash on the table between them. pic.twitter.com/5SawlLRwDP

Joe Keatinge: "Hey everyone I'm glad to announce the great nightmare is over and I confirm I have access in Edmonton to the @BreakingBad_AMC finale."

Joshua Williamson: "Watching the Breaking Bad marathon to prepare for tonight. All I can say is 'ugh, so good!'"

Joe Carnahan, director of 30 Days of Night: "Love that BREAKING BAD has always shot on 35mm film. We are firmly in the throes of the digital, High-Def age but LONG LIVE THE EMULSION."

Josh Elder: "So this "Breaking Bad" show is about the 80s b-boy scene, right?"

Marc Silvestri: "The realization that @BreakingBad_AMC is about to end has finally sunk in...My soul just farted."

Dan Slott: "By the end of tonight's BREAKING BAD remember this: NONE of this would've happened to the White family if Obamacare had been there for Walt."

Francesco Francavilla: "We've been rooting for a bad guy for 5 seasons. This is how good Gilligan is... @BreakingBad_AMC #GoodbyeBreakingBad"

Jamie McKelvie: "I really hope the Breaking Bad finale is good or my timeline is going to be full of a lot of really angry people this week."

Phil Hester: "How can you not love the fly episode of Breaking Bad? It's the entire series distilled into one hour."

Joe Hill: "Hope the BREAKING BAD finale is as good as the rest of the show. I won't see it for a week (still catching up) so will be scarce on Twitter."

Craig Byrne, webmaster of the Smallville fan/news site KryptonSite: "Tonight on Breaking Bad, instead of actually seeing Bryan Cranston in the costume, we see a teeny computer generated Walter White from far away."

Jonathan Hickman: "Just heard a story about a wife cheating on her husband and being so mad he wouldn't take her back she deleted Breaking Bad on the DVR."'

Bryan Lee O'Malley: "Ok SERIOUSLY now where am I watching Breaking bad tomorrow? Who's having a party?"

Brett Booth: "Unlike the rest of the comics world, I'm not a Breaking Bad fan."