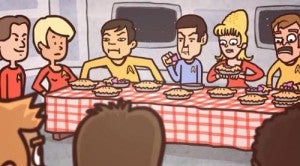 The sixth and final season premiere of Breaking Bad aired on AMC last night, and it offered up a little something for Star Trek fans. In the "Blood Money" episode of Breaking Bad, Badger described an idea he had for a Star Trek script, which involved a pie eating contest among the crew of the Starship Enterprise.

The contest eventually comes down to just Captain James T. Kirk, Mr. Spock, and Chekov. While Mr. Spock has an advantage due to his Vulcan control over his digestion, Chekov has a sneaky idea of how to win, which doesn't go exactly to plan.

With a Star Trek idea this good, it shouldn't come as a surprise that Badger's Star Trek script now has an animated version. Vulture had Matt Czap create the video below that visualizes Badger's idea. The Breaking Bad Season 6 premiere scored 5.9 million viewers, which was the shows biggest debut ever.