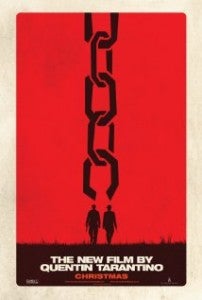 In news that no one really expected thought would happen, surprise guest Quentin Tarantino announced with DC Comics today at Comic-Con that a five-issue mini-series featuring the upcoming film Django Unchained would be published by the company.  Jim Lee introduced the famed director to a shocked audience in attendance for DC's Before Watchmen panel.  Tarantino did note that there would be some changes from what the film is doing versus what the mini-series will do.

Tarantino said, "We have worked out a situation where we're going to do a 'Django Unchained' comic. It's going to come out -- I think the first issue is going to come out a couple months before the movie opens and basically take the entire story of the film and do it as a comic book from beginning to end. What I'm really excited about -- not only do I love comic books, I always loved western comics in particular along with the superhero stuff. So I was really excited when it come up with doing a comic about the film. One of the things that I'm really excited about is that 'Django Unchained' is a big epic. When I write big epic scripts like 'Kill Bill,' there's a lot of stuff that doesn't make the movie because they are just too big. I'm always adapting my movie every day, my unwieldy script into a movie every day as I do it, but what's really cool about doing a Django Unchained comic book is that it's the entire script. Even though things might have changed in the movie, I might have changed something else, I might have dropped chapters, I might have dropped big pieces -- that will all be in the comic. The comic will literally be that very first draft of the script. All that material that didn't make the movie, all of that will be part of the piece. And I'm really excited about it."