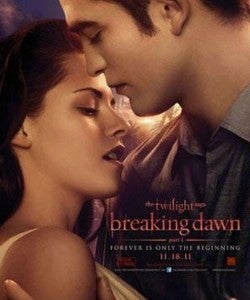 The Twilight Saga: Breaking Dawn Part 1 box office could make Hollywood start re-thinking the release dates they select for movies. Generally, movies with huge box office potential are opened during the summer to coincide with kids being out of school and adults being on vacation. However, the summer movie season has become very competitive, and several big budget movies had disappointing openings this past summer.

With Twilight: Breaking Dawn Part 1 scoring a $72 million opening day and weekend estimates coming in around $140 million, the Twilight series is once again proving that a movie doesn’t have to open in the summer to put up blockbuster numbers. The opening day total was the third best opening day ever, trailing only Harry Potter and the Deathly Hallows Part 2 and The Twilight Saga: New Moon (which also had a November opening). Early weekend estimates are suggesting a $139.5 million haul for The Twilight Saga: Breaking Dawn Part 1, but official results won’t be released until Monday. With Sunday shaping up as a wet and dreary day across much of the United States, we wouldn’t be surprised if Sunday’s box office turns up higher than expected and pushes Breaking Dawn more into the mid- $140 million range.

While the Twilight series has such a dedicated fanbase that it would likely have been a success whenever it opened, the less competitive Fall season could lead to a longer and stronger run at the box office. While there are lots of dancing penguins, Muppets, and chipmunks in the coming weeks, Twilight: Breaking Dawn Part 1 will likely have the teen and young adult audience mostly to itself for awhile.

Based on Twilight's success in November, other studios could soon start to follow suit to avoid the competitiveness of summer. Marvel Studios already previously announced a November 15, 2013 release date for it's second Thor movie. With a built-in following for the Avengers franchise, Marvel could be making a smart move with Thor 2, realizing it doesn't need Summer for the movie to be a hit.