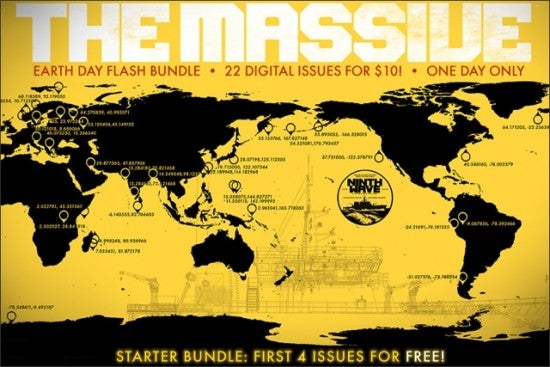 In acknowledgment of the 44th Earth Day, Dark Horse Comics are offering a deal on digital copies of their eco-thriller series The Massive, including offering the first four issues of the series for free. Today only, Dark Horse is offering digital comics readers two special offers to catch up on Brian Wood's acclaimed series: Fans can catch up on all 22 issues for only $10, or get a taste with the first four issues absolutely free. The Massive follows a group of direct-action environmentalists after the world has experienced a crippling ecological disaster. With society grinding to a halt and the planet itself in a state of rebellion, this group sails the world's oceans looking not only for its lost sister ship, the titular Massive, but for some sense of logic in all the chaos. What does it mean to be an environmentalist after the world's already ended? "On some level its all survivalist fiction. I don't read The Walking Dead so I can't comment directly," Wood told ComicBook.com about comparisons between his book and other global apocalypse-series like The Walking Dead. "But technically, The Massive fits the description of a post-apocalyptic story, even if I'm handling it in a very different way. So I'm sure the comparisons are sound. But I hear the word 'post-apocalypse' and cringe a bit. I think it means everything and at the same time nothing at all, and we feel like we've seen it all before. I use the word 'Crash' in place of it, which feels more grounded and topical." Download Brian Wood's The Massive to your iOS or Android device on the Dark Horse digital comics app, and head to your local comic shop tomorrow to pick up The Massive #22.