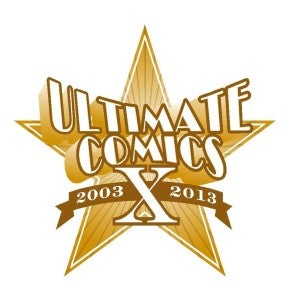 Epic adventures, supporting characters, fights, family, and satisfying moments of victory are all hallmarks of the comics world, but, as comic book store owner Alan Gill will tell you, they are also integral parts of the story of Ultimate Comics, a thriving comic book store that is concluding its month-long celebration of ten years in business. The store, located in the heart of the Durham/Chapel Hill area of North Carolina, spent the month of August thanking its customers with parties, store signings by talent such as Jeff Parker (Batman '66), sales, and an Ulti-lympics, a competition that saw participants being timed on looking up comic book prices, answering trivia questions, and more. In reflecting on the store's tenth anniversary, Gill discussed the store's origins, it's growth, and Ultimate Comics' own path forward.

In thinking about where Ultimate Comics is today, Gill was reminded of his own foray into comics that sparked his urge for a store of his own. At the age of six, Gill's family moved to Spain. It was here that his love of comics began. "This was 1976. There were no video games, no 24 hour cartoon networks, and TV for me in this country was literally foreign. Comics were my world. Going to the base and getting them every week was very important. When I walked into my first comic book store, it was in Melbourne, Florida. I was twelve years old and I remember it was horribly disorganized and reeked of urine, but I loved it and that feeling stayed with me." That love of comics and the business side of the industry was coupled with a strong drive for his own, self-directed career path. "I’ve been doing what I’ve wanted to do forever by owning my own store. I grew up with my dad having a government job and hating every minute of it. I wasn’t going to do that. I’m not going to be in a job I don’t enjoy. If I get tired of this, I’ll go out and find something else." 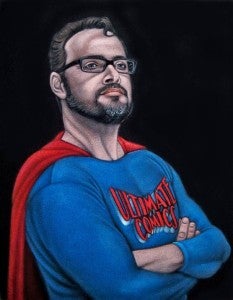 It was from that love of comics and desire to be his own boss that helped to drive the beginning of what would become Ultimate Comics. "When I first opened, my store was a 600 square-foot hole in wall next to my TCBY (a yogurt store owned by Gill). I didn't even think that it would ever be a real, vialbe business. It was an expanded hobby. Something more for me to do, a fun job. TCBY  supported me, and Durham didn’t have a comic book store and I wasn’t happy with stores in surrounding areas," he said. This was in August 2003, and even though a comic book store in Durham was a welcome sight, Gill acknowledges that those earlier days were tough but could have been tougher. "It would have been harder had I known how to open a business. I literally looked for a spot I knew I could afford, and I signed the lease. I opened my Diamond retailer account and that was it. I used my credit card to open the store. I rolled the dice. It was either going to succeed or fail."

Despite little advertising and marketing, the store continued. People found the store by word of mouth, and Ultimate Comics started to build a base, despite its still humble beginnings. That base has now grown to over 400 subscribers who pick up their comics every week at the store. "When I think about that original store, I still miss it," Gill said. "That store was small, but you were close to everything and the customers, too. I have a lot of memories of those first few years, especially with my kids being there a lot. They were three and one when we opened, so they've grown up with the store as well. And a lot of my long-time customers were some of the first ones to visit that store, so it's special."

After those initial years, Ultimate Comics expanded, eventually having four different stores in the Durham/Chapel Hill area. It was a gamble that lasted a few years, but Gill made the decision to eventually collapse the stores back down into one, larger store, the current Ultimate Comics of over 2200 square feet. In thinking about expanding, Gill said, "Was that a mistake? I felt like there was a demand for more stores, and I was using the rationale of Starbucks. If there's one close by, people may be more willing to buy coffee. But comic book people are willing to drive an extra ten or fifteen minutes to get to their comic book store, so the multiple stores may not have been needed. Back then I had people willing to work in the stores, and a lots of opportunity to have multiple locations, but the one store we have now is better organized, and it's run really well. My staff at this store is great."

While the multiple stores may not have worked in the long run, one area of expansion for Ultimate Comics that has grown exponentially has been the store-sponsered comic convention, NC Comicon. Started after Ultimate Comics' fifth year in business, NC Comicon seemed like a logical step for Gill. "As I was consolidating the stores, I still felt like there needed to be something else for us to do. Just like the first store, there was no planning. It was simply 'hey, let's do a comic book show.'" This will be the fourth year for NC Comicon, and Gill says that the store's reinvestment in the show has it poised to be the biggest convention yet. "This year we have a party, and a film festival, more panels, and an awesome guest list." Guests for this year's NC Comicon include Frank Cho, Gail Simone, Neal Adams, Adam Hughes, and others over the weekend of November 8th, 9th, and 10th.

"We're bringing in a lot for such a young show," Gill said, adding, "We had 5,000 people show up for last year's show, and we're excited that we get to keep it in Durham even though bigger venues in other places exist. Our customer base has been great in building this event." That customer base has been one of the biggest joys for Gill, and they also have been pleased in reminiscing about Ultimate Comics' history as well. "They bring up a lot of details and memories that I’ve forgotten and they bring up some employees I’ve forgotten! I get so caught up in the day-to-day stuff that they’ll bring up some detail about a free comic book day or a store event at one of the previous stores, and I’ll remember it as soon as they bring it up. We've done events every weekend for our tenth anniversary, and bottom-line is that a lot of stores don't do that for their customers. We always want to go the extra mile for them."

For Gill,the real joys of the tenth year anniversary have been closely tied to the people involved with those events, sales, signings and adventures over the years. "I've been able to spend a lot of time with my children, which is tricky as a small business owner, and I've seen our customers' kids grow up. My social life is wrapped up in this place. My employees are my friends, my customers are my friends, and the people here are the great part." Gill sees the future of Ultimate Comics as one full of potential, with another store not out of the question. While Gill doesn't dwell on the past in looking back over what could have happened or what didn't with the store's growth, there's no doubt that the supporting characters, the adventures, fights, family, and moments of victory have led them all to this happy moment.