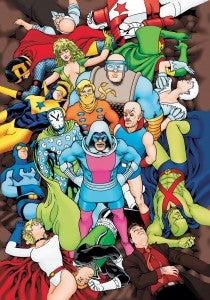 by Geoff Johns and Jim Lee came out today, officially kicking off the “new” DC Universe and retelling the origins of the world's premiere super-team. But what about those of us who wanted one last look at the Justice League we grew up with? DC's RetroActive specials were a lot of fun, none moreso than the Justice League RetroActive: The '90s one-shot by Keith Giffen, J.M. DeMatteis and Kevin Maguire. Featuring Booster Gold, Blue Beetle and the Justice League International crew from the late '80s and early '90s, it was probably the most enjoyable single issue of a Justice League comic book since Infinite Crisis relaunched the title and gave those of us who grew up in the late '80s and early '90s an opportunity to bid a(nother) fond farewell to our favorite iteration of the team.

Co-writer J.M. DeMatteis is saying good-bye to these characters, too, telling ComicBook.com that he can't see himself going back to them again even if DC were to ask. He joined us to take a last look at the team that made us all bwa-ha-hah for all these years.

ComicBook.com: You seemed—and this is listeners talking, and me too—a little put off by the way things went on Booster Gold. You were a good soldier about it, didn't say anything, but that's the general vibe that came through in that last interview a bit. After finding out what was going on, in terms of the relaunch, did it make you feel any better about the conditions of being bounced suddenly and surprisingly from Booster Gold? The idea that it was happening to everybody?

J.M. DeMatteis: Honestly, I thought we were yanked from the book very suddenly and—for me at least—unexpectedly. That said, it was really no big deal in the scheme of things. The real loss was that I no longer had a monthly sandbox to play in with Keith Giffen.

ComicBook.com:So do you think it's safe at this point to say that (at least as far as other creators are concerned), your League is the definitive “take” of the post-Crisis, pre-relaunch era? Not only did DC give you the final Justice League story to tell (the last issue of Justice League of America came out last week), but you had shout-outs in not one but TWO Green Lantern books this week (both Emerald Warriors and the Ron Marz-written RetroActive special had "one punch" references).

JMD: One of the nice things about this RETRO book coming out is the incredible response it's getting. We saw it, as well, last weekend at the Baltimore Comic Con. (Believe it or not, BCC was the first time Giffen, DeMatteis & Maguire ever did a panel together!) So many people love the JLI books, it seems to mean so much to them, and it's genuinely touching. I'm very grateful that we've created something people still treasure after all these years.

ComicBook.com: I suspect this isn't the kind of thing that really matters all that much to you as a creator, necessarily, but as a freelancer with not a ton of inside information it might be as interesting for you to speculate as it is for we fans: What do you think the odds are that the run in question ever HAPPENED anymore come next week?

JMD: The stories are out there, in print, for anyone to pick up and read. They happened as much as any other fictional story happened. As for where it all stands in the new DCU...there's going to be a JLI book, so these characters must have some history. Or maybe not. Honestly, it doesn't matter to me. In terms of DC's reboot, what matters is that the books are good, the stories are solid. If they are, the reboot will be a success. If not, it's back to the drawing board. I hope they succeed, because, in the end, it won't just be good for DC, it will be good for the industry.

JMD: Nope. We're done. Keith and I were pretty much done after we finished our Booster Gold run, but the chance to do one final story with Kevin—who really knocked it out of the park, the guy just keeps getting better and better—was too good to pass up. I'm glad we did it and extremely happy with the result.

ComicBook.com: You just wrote a story featuring many of these characters (although primarily revolving around Beetle and Booster) during your run on Booster Gold last year. Was there a difference in how you approached writing a “retro” JLI story versus those issues of Booster Gold?

JMD: The Booster Gold story was a time travel adventure, a jaunt into the past, with the main focus on Booster himself. RETRO felt more like a lost issue of our original run. It was a full-out JLI story and it was a blast to write.

ComicBook.com: We got one good “bwa-ha-hah” in the issue, and plenty of humor and character moments, but overall it didn't have the same sense of just being goofy fun that we've seen in your more recent approaches to JLI stories, notably “Formerly Known As...” and “I Can't Believe It's Not...”. It felt more like the monthly. Was that a conscious choice?

JMD: Nope. We just did what we always do: followed the story wherever it led us. I think it was very much of a piece with all our work.

ComicBook.com: Was that “Take it to the Max” coffee mug scripted, or did Kevin or a letterer put that in? Because I want to put that image on a t-shirt.

JMD: That was Kevin. And pretty clever, too!

ComicBook.com: “It's good to know there's one person on this team I can trust.” A throwaway line that seems a bit...loaded. The way Max has been handled for the last five or six years really gets to you guys, doesn't it?

JMD: It really wasn't a throwaway line: it was a very conscious comment on where those relationship were going to lead. Does the way Max has been handled "get" to me? No. It just doesn't jibe with the Max I know and wrote. But that's comics, folks. Characters are always being reinterpreted and reinvented. C'est la vie!

ComicBook.com: With Oberon, Max and Kilowog (even Power Girl's cat!) all represented, plus a few pages here and there of characters who aren't really a big part of the A plot, this really felt like it was an inclusive effort to get all the old faces on the page. Was it fun to have them all around again or was it limiting feeling like you had to represent everybody in a 30-page story?

JMD: Absolute fun from beginning to end. Working on this was really effortless and a total pleasure.

ComicBook.com: Digital comics can be a positive thing! Did you realize that Justice League America #37 (the big “Power Girl's Cat Issue”) is available for only a buck on the Comixology site?

ComicBook.com: Is the RetroActive special the first time we ever got the name of Power Girl's cat? I haven't re-read most of the hardcovers recently so I can't remember and I've always just referred to it as “Power Girl's Cat.”

JMD: Yes, it is. As I was scripting I just threw in the "Theodore" gag and it seemed to work.

ComicBook.com: So...should we think too hard about how this story fits into the timeline before the JL Antarctica story?

JMD: No. Don't. You'll just give yourself a headache!

ComicBook.com: Do you know what went into the decision that Justice League America #62 would be the backup story in this issue?

JMD: They wanted a JLI story from the 90's and they wanted one that Kevin drew, so that clearly limited us since Kevin did very little JLI work in the 90's. We would have preferred a story like "Moving Day," which was a definitive moment in our run. So what if it came out in the 80's? Really, who's going to care? The story they chose was a good one, but atypical for sure.

Bwa-Ha-Happily Ever After: J.M. DeMatteis On Yesterday's Justice League