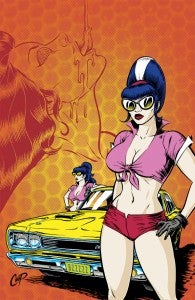 This weekend at the Chicago Comics and Entertainment Expo (C2E2), Dark Horse Comics have been arguably the most aggressive publisher on the floor, announcing a handful of new projects from high-profile creators. The latest? Eisner nominee Alex de Campi (Smoke, Ashes) headlines "a B-movie comic masterpiece" in Grindhouse: Doors Open at Midnight! Featuring covers by Francesco Francavilla, Dan Panosian, and Coop, the publisher says "this series is excessive, gratuitous and tasteless—just like you love it." Bringing the flavor of midnight exploitation flicks to comics, Grindhouse delivers four two-issue gore operas, starting with the Chris Peterson-drawn "Bee Vixens from Mars," pitting a one-eyed southern Latina deputy against lusty alien chicks bent on laying eggs in the entire male population. Future arcs include "Prison Ship Anteres," featuring art from Simon Fraser; "Bride of Blood," with art by Federica Manfredi; and "Flesh Feast of the Devil Doll," with art by Gary Erskine. "Grindhouse is the comic your mother warned you about. Seriously. You know when grownups told you comics were filthy, immoral trash? They were talking about this comic specifically," said de Campi. "Books like Grindhouse were the reason the Comics Code was invented. And if you're in a very conservative or evangelical part of the US, you should be careful where you read it. Each story is two issues of solid gore, gratuitous nudity, and over-the-top badassery. It's filthy. It's violent. It's really, really fun." "Bee Vixens" colorist Nolan Woodard added, "You do know I colored 28 Days Later, and this is still way more blood, right?" Grindhouse: Doors Open at Midnight #1 is on sale October 2.